The Lowland by Jhumpa Lahiri


Subhash and Udayan are brothers.  They do everything together, inseparable as children.  They conspire together, plot together, play together and trespass together.  Then, as they age, their lives begin part.  Subhash is drawn to America and Udayan to the politics of the Naxalite movement.  These threads begin a novel that spans decades and in which family secrets become the things that bind people together and keep them apart. 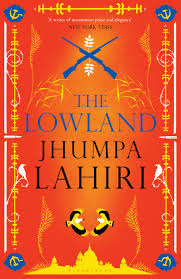 The blurb for The Lowland, Jhumpa Lahiri’s latest novel, is very keen not to spoil any of the many emotionally powerful twists this novel takes.  It is only fair that I keep them hidden as well – for there is great joy in reading a novel about which you know little beyond the points of inception.  It is, however, difficult to review a novel without at least spoiling a few of its delights.  So before such spoilers abound, I shall say that Jhumpa Lahiri is a fine prose stylist, and many passages in The Lowland sing with great power, some dextrous writing and an appealing, engaging and emotionally powerful storyline.

This is not to say that The Lowland is without flaw.  Lahiri’s scope is vast – decades in the lives of her protagonists (who are Subhash, his brother’s widow Gauri whom he marries, and his brother’s daughter, Bela, whom Subhash treats as his own daughter  - Udayan is killed early on, in a piece of police brutality) – and this scope sometimes means that emotional decisions her characters make do not always feel justified.  We learn early on that Gauri is intellectually curious, and extremely bright, and her future career as an academic feels earned through this ground-setting.  Gauri, however, becomes withdrawn from Subhash and her daughter, and while they are both in India, she flees, breaking off contact with her own child for decades.  This decision, which reverberates through the second-half of The Lowland feels less justified – even a little confusing – though it does lead to a truly affecting final scene between mother and daughter.  Also, because of its scope, some of the more minor characters in The Lowland feel underwritten – they are characters who appear to justify some emotional change in Subhash or Gauri, and then promptly vanish from the narrative.

Such criticisms as outlined above seem likely to derail a novel – but it is testament to Lahiri’s skill as a novelist that they do not disrupt The Lowland too dramatically.  The inherent dramatic potential of her subject matter – a brother marrying his own brother’s widow and adopting their child as his own – means that for the majority of its page count, The Lowland is a riveting, engaging and incredibly well-researched novel.  I devoured it in one breathless sitting.

I think so.  It is dramatic power, is emotionally engaging and vivid in its depictions.  Lahiri has a fine, subtle prose stylist whose pen provokes some startling insights.  Its flaws are dampened by everything else around them, and ultimately The Lowland is a novel with massive reader appeal that can withstand critical scrutiny.
Posted by Ben Dutton at 12:52