The Testament of Mary by Colm Tóibín


Colm Tóibín is no stranger to the Man Booker prize.  He has been shortlisted in 1999 and 2004, and longlisted in 2009.  His work is often cited for its originality, beauty and power.  Of all the novels longlisted for the 2013 Man Booker Prize, Tóibín’s is the shortest, coming in at just 104 pages in hardback. 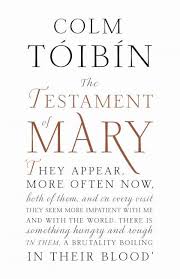 The Testament of Mary tells the story of Jesus Christ from his mother’s point of view.  Her first person narration brings us close to many of the gospel tales, but from a perspective never accorded them before.  To present stories that are so familiar to anybody raised in a Christian country, whose iconography is ubiquitous, must present challenges to any writer: to make those moments seem fresh and startling again is the mark of a master.  For in The Testament of Mary, Tóibín manages to breathe new life into the gospel stories, and to bring to life for the reader a woman whom we all think we know, but never truly have.

My initial fear would be that Tóibín would attempt to write in some faux-Biblical voice – to present this as some forgotten now found gospel – but what he does is cleverly than that.  He writes very sparingly, allowing Mary’s voice to come across sharply and clearly.  By doing so he brings us closer to Mary.   The novel is set some time after the crucification when two unnamed visitors have come to find her and ask her to give testament to her son.  Mary, who cannot bring herself to name her son, simply referring to him by that name, or “the one who was here”, offers her own quiet interpretation of events.

She refers to her son’s followers negatively, is distrustful of the cult she sees rising around him, and sees that her son is drifting from her – until, in a moment from the wedding feast at Cana, she fails to recognise him.  Her love, though does not diminish, and she is there with him at the crucifixion, and admits to weaknesses her visitors would prefer not to hear.

The Mary of Tóibín’s novel is contrary to much Marian doctrine and to the beliefs of the Roman Catholic church, but never feels disrespectful.  It presents a different interpretation of familiar stories, and brings to life in Mary a depth of human feeling she is sometimes not allowed in Christian belief.

The Testament of Mary then, is a beautiful, haunting novel, full of quiet power and dignity.  Even for the non-religious it offers jewels.

Almost certainly, I feel.  Writing this good comes along so very rarely that it should be rewarded.  However, the subject matter might see certain people immediately distrustful of it, and could see it booted out at the longlist stage.
Posted by Ben Dutton at 19:41