Charlotte Mendelson’s last novel was the incredibly well-received When We Were Bad, a novel that earned her place on the shortlist for the Orange Prize, and accolades from the British press who called her novel one of the year’s best.  Almost English is her eagerly awaited new novel. 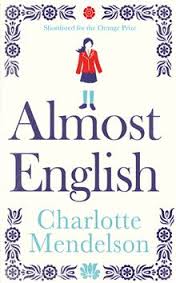 Sixteen year old Marina lives with her extended family – her mother and three Hungarian relatives, all of whom are quick to judge Marina and her decisions.  Marina craves nothing more than her independence, and so has talked her mother into letting her move schools, to Combe Abbey, a prestigious boarding school that only allows girls entry in the sixth form.  She has been there a term already, and developed a heart-stopping crush on Simon Flowers, but as she escapes a family party over Christmas she bumps into a fellow Combe pupil, Guy Viney.  This accidental meeting begins a sequence of events which will see Marina’s world rocked forever, and a bundle of past secrets will come to light and change everything.

Mendelson is very good at creating the world of Combe Abbey – all of its petty school life concerns ring true – and Marina’s home life, with the ancient Hungarian aunts, is equally well-drawn.  Marina herself is a jumble of nerves, a girl so desperate to be grown-up that she makes mistakes, so many mistakes, that the reader can’t help but care for her.  As her relationship with Guy deepens, she is taken to meet his parents – his father is a famous historian – and though certain future plot developments flash like neon in the sky at this moment – that Mr Viney will attempt to seduce Marina is never in doubt – it is to Mendelson’s credit that, though this is obvious, the book never once lurches into dullness or complete predictability.

There is a lot to like in Almost English.  It whips along at a great speed, the sort of novel that provokes you into devouring it in one sitting (which I did).  It has humour, pathos and drama.  Endings to coming of age novels are notoriously difficult to pull off – after all, your character’s life journey is just beginning as your novel ends – and the ending Mendelson has crafted here is just right: the action Marina takes seems entirely justified and utterly egregious.  Like the best coming of age novels, it leaves you wanting to know where her life can go from here, and satisfied with what has gone.

While Mendelson’s novel is very enjoyable, I think perhaps it is a little too familiar to progress much further.  There are countless coming of age novels, and though this is a good one, it is perhaps not enough to warrant short-listing.  However, in its portrayal of Hungarian communities in London, there is a unique quality to Almost English, and that might be enough to entice the judges into shortlisting it.
Posted by Ben Dutton at 16:44