The Kills by Richard House


At over 1,000 pages, The Kills is by far the longest novel on the 2013 Man Booker Prize longlist.  It is by novelist, Richard House, and comes trumpeted as a multimedia experience, for House is also a filmmaker and there are short films that add to The Kills experience when viewed online or embedded in the digital edition. 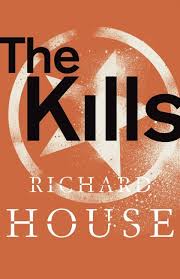 The Kills is actually four novellas grouped together (the spine of the hardback states that these are Books 1 – 4, novellas individually titled Sutler, The Massive, The Kill and The Hit, and all were, it seems, published individually as ebooks before being grouped together for physical publication.)  Then there are those online films – the book provides the URLs and tells you when they should be watched.  If you buy the book on your iPad you can watch the films at the right spots.  These films are extras, things that enhance what you know already, or offer a side story connected to the main plot, and though they are not necessary to your enjoyment of The Kills, it is true that they add something when viewed in tandem with the reading.  I read Sutler without watching any, and then made a point of watching them when it was time to.

This is a massive undertaking.  The first two parts – Sutler and The Massive – are interconnected, stories about contractors working in Iraq, one of whom has gone on the run with a huge amount of stolen cash – but the wrong man might be on the run.  In The Massive, the toxic clouds caused by the burning of rubbish causes death around the burn pits at Camp Liberty. These two parts provide a unique perspective on the Iraq conflict, a point of view rarely put across in fiction of that conflict.  There are no soldiers here, no insurgents, but simply middle-men, contractors trying to make a living.

The third part is perhaps the most difficult to appreciate.  The action shifts to Naples, and we meet all the gory elements of Neapolitan lowlife – the prostitutes, the dealers, the murder rooms and tortured dogs.  It is a brutal, violent world House conjures in this part, and quite often it turns the stomach.

The final part returns us to the mystery of Sutler, when the sister-in-law of a German diplomat becomes embroiled in the disappearance of Sutler.

What The Kills shows, time and again, is House’s ability to create vivid characters.  These characters breathe on the page, and very quickly the reader is involved in their story.  His style is pared down, direct, but never dull.  He has also managed as well to do that rare thing, to create a digital edition that is worth reading over the print version.

At first I thought probably not.  This is a thriller, and thrillers never get shortlisted.  But the digital edition seems to be something fresher, original in execution, and it could easily see The Kills rewarded over one of the more traditional novels currently longlisted.
Posted by Ben Dutton at 20:16