Jim Crace published his first book in 1986, and since then has released a number of highly regarded novels, including 1997’s Quarantine (shortlisted for the Man Booker in that year), and 1999’s Being Dead.  He might have other great novels besides these two, but I hold my hand up and admit these are the only two I’d previously read.  I thought both were fantastic, which makes me wonder now why I’ve not tracked down his other novels.  There has been some reluctance in me, I think, the feeling that maybe those other novels of his maybe won’t be as good as Quarantine or Being Dead.  When Crace announced his retirement from fiction I felt it as a sad thing, that we were losing someone with an original and startling voice.  Then his possibly final novel, Harvest, was longlisted for the Booker, and I returned to the sometimes strange world of Jim Crace’s fiction. 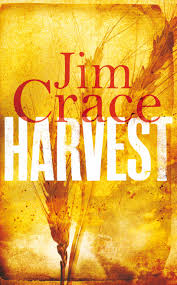 As summer comes to a close, and Walter Thirsk begins to prepare for winter.  He lives in a village, at some unrecorded point in the distant past of this country (the UK), when villages relied on the land to feed them and keep them, and when a neighbouring village could practically be another country.  Into his quiet place stride three strangers and darkness begins to mass at the village boundaries.  The manor house’s hayloft is set on fire, and the residents of the village, seeing smoke from a camp fire, approach the strangers.  From here, it can only go badly wrong for the people of this place, and for Walter Thirsk. This is a novel in which the threat of violence is everywhere, is loaded into every interaction, and where death stalks cruelly.

The three strangers are not the only new face in town, however.  There is also a man the locals have come to know as Mr Quill, who is mapping their landscape, drawing charts, and talking of enclosing the land for sheep.  It seems for this village, the way of life is really about to change.

Jim Crace has always been a prose stylist of considerable quality, and Harvest does nothing to alter that perception.  This is a very fine novel indeed, full of menace and power, that draws the reader into a maelstrom of emotion.  Walter Thirsk is a very human character, flawed, a man who makes mistakes and must live with the regret they cause.  His inaction causes much damage.  As this novel hurtles towards its fiery climax, it is difficult not to be sucked in, to fear with Walter, and fear the changes to come.

What Crace has done is create a fully realised medieval period piece that feels as contemporary as any thriller.  It puts paid to any idea that historical novels are stuffy and dull.  If this is indeed Crace’s final novel, then he has gone out on a high note.  I sincerely hope it is not, though, for on the strength of this he has a truly great writer.  And in the meantime, I have his back catalogue to catch up on.

Almost certainly.  Being heralded as his final novel will see many clamouring for him to win an award that he probably should have won a decade ago.  Harvest is finely written, engaging and brilliant.
Posted by Ben Dutton at 19:18