Tash Aw’s first novel, The Harmony Silk Factory, was longlisted for the 2005 Man Booker Prize and won the 2005 Whitbread Book Awards First Novel Award as well as the 2005 Commonwealth Writers Prize for Best First Novel (Asia Pacific region). It also made it to the long-list of the 2007 International Impac Dublin Award and the Guardian First Book Prize.  His second novel, Map of the Invisible World, was more divisive, with some critics stating that, while it showed promise, it was not a patch on his debut.  But then, second novels are notoriously tricky.  Aw seems to have gone away and thought long and hard about the trajectory of his career, and the result is this, his third novel: Five Star Billionaire. 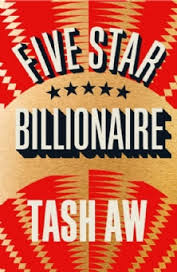 Five Star Billionaire is an ambitious novel.  Set in the bustling streets of Shanghai, we meet a disparate set of characters: Phoebe, without a job but armed with self-help books and determined to catch herself a rich man.  Justin, from a rich family now bankrupt, a man withdrawing from life but hoping to connect with Yinghui, a girl he once knew.  Then there’s Gary, a pop star able to break a million hearts, whose life is about to spin dangerously out of control. Finally, there is Five Star Billionaire, whose work touches these lives, and might be more than he seems.

As I said, this is an ambitious novel.  There is a lot going on.  Each of the novels strands is enough for a single novel.  And yet, Five Star Billionaire is not as long as this might suggest, it is just 435 pages, which means that there is a lot contained in each page.  Aw is a great prose stylist – anybody who has read The Harmony Silk Factory could tell you that.  Five Star Billionaire is just as good.  There are passages on each page that sing beautifully, and Aw is great at getting inside the heads of his characters.  Each of his central figures feels individually drawn, and there is no mistaking who is who.

With so many different plot lines in the air, it is testimony to Aw’s skill that the reader doesn’t lose their place.  For a novel with so much going on, it is actually quite a simple story: each character here is simply looking for love and companionship, which they sometimes channel into material things and drift further away from what it is they crave.

I admired Five Star Billionaire.  Aw brings to life Shanghai wonderfully – a city I know little about, but which now I think I have some knowledge of – and his handling of the material is strong and solid throughout.  With so many strands, and four central characters, it is only natural that a reader would feel affinity with one character more than another, and I found myself longing to return to both Phoebe and Gary’s stories whenever we were away from them.  This, I think, is a sign of a great novel.

I think so.  It has all the right subject matter, prose styling and skill to warrant a shortlisting.  However, its somewhat episodic structure (a necessity when shifting between four central figures), might make the novel feel less cohesive to some readers and could see it culled unfairly.
Posted by Ben Dutton at 17:15