NoViolet Bulawayo came to attention with her win for the 2011 Caine Prize for African Writing for her short story Hitting Budapest.  That short story detailed the lives of street children in a Zimbabwean shantytown.  We Need New Names, the debut novel from Bulawayo, expands that short story. 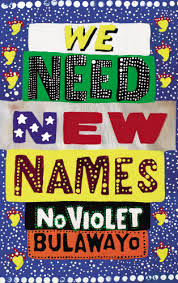 Darling and her friends live in a place called Paradise.  It is a messy sort of place, impoverished, rural, the sort of places that breeds boredom in its children.  Darling and her friends make up games to pass the time – Find Bin Laden, for instance – or steal guavas from their neighbours.  Then one day, the adult residents of places like Paradise and its surrounding shantytowns decide to reclaim their country from the white men that live there too and Paradise soon descends into violence.

Violence is omnipresent in the first half of Bulawayo’s novel.  The violence is often seen by Darling and her friends in brief snapshots – they never truly understand what it is they are seeing – but the reader knows, and this lack of knowledge in the children and the knowledge the reader has of what bloodshed is to come, gives We Need New Names some incredibly palm-sweating pages, especially when a gang of men begin to threaten a family.

To her credit, Bulawayo doesn’t allow Darling to become witness to the sheer brutality that rages, but more impressively allows Darling and her friends to witness the aftermath in interesting ways.  They break into the home of the family that have been evicted (and undoubtedly murdered), where Darling answers a telephone call from the missing family’s relatives.  Such perspectives shake up Bulawayo’s novel, and allow us another perspective on a story we think we know.

However, just as Bulawayo’s novel seems to be taking us towards a dark heart in Africa, Darling is whipped away to DestroyedMichygan (or Detroit, Michigan to everyone else) and the characters, lives and stories of Paradise are forgotten, so Bulawayo can tell the story of a young girl adrift in a very different, unknowable (to her) country.  This tears a hole right in the middle of We Need New Names – and this proves both good and bad for the novel.  The insights into American culture Darling has are often illuminating, but her lack of engagement with many of the new characters Bulawayo must introduce means that the second half of the novel remains distant to the reader in a way in which Paradise never was.

Africa is a huge continent with many problems, and sometimes in her novel Bulawayo seems like she’s throwing everything at the page at once: we have racial and political violence, childhood pregnancy, bodies hanging from trees, the spectre of AIDS (Darling’s father is dying from it), street children and incest – and sometimes this overwhelming torrent of ‘issues’ means that We Need New Names can read like a playlist of all the big issues on that continent.

What stops We Need New Names from falling apart due to this rupture is the sheer verve of Bulawayo’s prose.  She is an extremely talented novelist.  Her sentences fizz and pop on the page, they crackle with energy.  It is not all fireworks, though, for she proves equally adept at creating characters, and the friendship between Darling and her gang is wonderfully drawn.

The subject matter is clearly important, and is very well written, which could see it slip easily onto the shortlist.  Equally, the rupture that occurs half-way through the novel might cause some to feel that We Need New Names is less rounded than it could otherwise be.  In a year where some very fine novels have been long-listed, this is a tough one to call.
Posted by Ben Dutton at 14:17