The Marrying of Chani Kaufman by Eve Harris

It is a great success to have your debut novel long-listed for The Man Booker Prize.  It means reviews from critics who would probably have overlooked you.  It means sales you’d probably otherwise not have gotten.  It also means your novel is looked at far more critically than it would have been had it not been long-listed.  The last few weeks have seen a number of reviews of Eve Harris’ debut novel, The Marrying of Chani Kaufman, published through small Scottish label, Sandstone Press, and the reviews have almost all said how unlikely it is for the novel to progress to the shortlist.  I mention these points as, for however fine a novel The Marrying of Chani Kaufman is (and it is a perfectly fine novel), it cannot be helped but to think it is a novel punching above its weight, that the attention only serves to highlight the novels flaws, and puts undue pressure on Harris for her next novel. 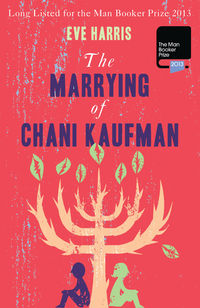 Chani Kaufman is a girl about to marry a boy she barely knows.  It is a great beginning, and Harris’s prose in these early chapters is dextrous and powerful enough to bring us easily into this young girl’s life at a moment of great change.  I certainly felt for her, caught between the duties of religion, family and social standing.  She is a wonderfully drawn creation, sparky and energetic, willing to stand her ground even when others tell her not to.  She is to marry Baruch, a boy she barely knows – but who has chosen her – and he too is well drawn, a mix of conflicts, much like Chani (see, they really are perfect for each other, the novel screams).  Then there is the rabbi’s wife, Rivka, whose own life is a mix of contradictions, and who holds a terrible secret.   These three lives will all be altered in some way by the marrying of Chani Kaufman

Eve Harris is a skilled novelist.  She juggles the various strands of her novel with dexterity – it is a novel that essentially covers a few days but skips back and forth through the decades to reveal motivations, secrets and lies, and how compatible Chani and Baruch really are (despite not knowing each other).  She knows the ultra-Orthodox Jewish world well, and weaves in their religious traditions and words without overwhelming the reader (there is a glossary at the back, just in case you mix your blintzes with your rogellach).  It is not an easy task to bring to life a world with which many readers will be unfamiliar, and Harris does it well.

Just occasionally I found that her prose slipped into cliché.  For example, Baruch says ““I knew my mum was the meddlesome type but this really takes the biscuit!””  It’s a perfectly valid speech, but the clichéd manner in which Baruch speaks either reveals laziness from the author or that Baruch is actually quite dull.  It happens a little too frequently for me to think it is laziness from Harris, but equally it goes unnoticed by the characters so that if it were to be a flaw in Baruch’s personality, it has gone unnoticed.

Ultimately, I found that Harris’s novel resembled a rom-com.  With its misunderstandings, comic interludes, and wedding night jitters, one can easily see the film playing behind the novel.  It would make a fine film too, I’m sure.  It has all the right ingredients.  As a novel, it is very enjoyable read, with engaging, well-drawn characters.  It promises good things for Eve Harris, who I’m certain has great novels to come.

I think not, though its authentic creation of the ultra-Orthodox Jewish world might impress the judges enough to let it through.
Posted by Ben Dutton at 15:30