The Good, The Bad and the Multiplex by Mark Kermode, a review


I can still remember the moment I fell in love with this thing called cinema.  Doctor Alan Grant, striding into a field, and looking out over the plains and seeing dinosaurs.  Living, breathing up-there-in-all-their-glory dino-fricking-saurs!  I didn’t know how Steven Spielberg had done it – but that summer in 1993, I sat entranced in my local flea-pit cinema (one screen, sticky floor, but with ushers, projectionists, chocolate raisins at the food counter; a cinema that didn’t seem to have changed since the 1930s and one I hoped never would: That old cinema is a Wetherspoons pub now.)  So anyway, Jurassic Park was the first time I fell in love with the medium.  I’d seen films before (Timothy Dalton as Bond in The Living Daylights in 1987, in the same flea-pit cinema… how I miss her!  I’d been terrified by Spock as they Searched for him in 1984 and I was 5), seen many more on home video (I cherished those days when Mum used to bring home something from the video shop (remember them?), be it the latest Karate Kid, or Bond, or even some dodgy ninja knock-off), but Jurassic Park was the moment I fell in love.  It wasn’t just the film, but the experience, my first time alone, in the dark, facing my fears. 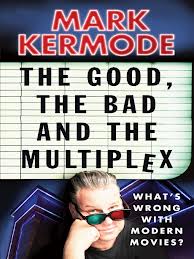 I go to the cinema a lot less these days.  It’s overpriced for the experience you get, an experience Mark Kermode so rightly rails against in his frothy, insightful and often very funny book, ‘The Good, The Bad and the Multiplex: What’s Wrong with Modern Movies?’, an experience not worth paying for.  I’ve had my fair share of digital freezes (in a medium that supposedly cannot freeze), badly projected films (I remember watching Johnny Depp in something once and half his face was missing, spilling out over the ceiling!), and in cinemas where the staff don’t care that its patrons are being short-changed by all their poor work.  I complained once that a film was badly projected, and received a risible snort from a manager, a comment that it was being shown how it should and reluctant offer of my money back.  As Kermode shows in his book, such experiences are now common place in the British multiplex, a place in which anybody with knowledge of cinema is considered a snob.

If you love cinema as deeply and widely as I do (you’ve no problem with subtitles, and have seen rather more subtitled cinema than Hollywood cinema in an actual cinema in the last decade) then many of the arguments Kermode projects will be nothing new.  But I suspect his book isn’t aimed at the true cineaste, but rather at the average punter who doesn’t know the difference between Antonioni and Tom Arnold.  His blokey, jokey banter that fills most of this book, before he launches into his explanation of what is wrong with modern movies, is clearly aimed at the average punter.  And if his book takes at least one person to a cinema showing a subtitled movie, or makes them track down Spoorloos over The Vanishing, or Låt den rätte komma in over Let Me In, then he’s doing his job.

The Good, The Bad and the Multiplex is an admirable book, though sometimes I found the banter that fills its pages less funny than Kermode seems to think it is.  The arguments he makes could easily have been told over a fifty pages – but I think presented so, they’d have come across as a lecture and he’d have reached less people.  Its current format, jokes and all, make his book accessible.  This is the intelligent article remade for stupid people, just like those intelligent art-house films are remade for those who can’t be bothered concentrating.  This isn’t a criticism as such: you have to reach the people somehow.  It just means it’s not quite the book for me – though he did make me laugh a few times – and didn’t say anything I hadn’t already thought.  But I read a lot about film, I think a lot about film.  And I agree that Saw 3D is rubbish.  So I’m already a convert to the message Kermode is preaching.

There is a lot that is currently wrong with the British cinema experience – the solutions Mark Kermode presents here might go some way to correcting it.  If only those with money would listen to the people who pay for their product, rather than to the money kerchinging in their coffers.
Posted by Ben Dutton at 12:55

Labels: book review, mark kermode, the good the bad and the multiplex