Britain in war-time.  Scenarios suggested by such a simple line are plenty, and there are many hundreds – if not thousands – of novels that portray such lives.  Alison Macleod has stepped into this crowded marketplace with a novel of quiet beauty.  Unexploded, her fourth novel, introduces us to the Beaumont family – Geoffrey, Evelyn and their eight year old son Philip.  It is 1940, and war is threatening to spill onto British breaches.  In Brighton, the tension is palpable.  Geoffrey, a bank manager, has been appointed in charge of an internment camp close to the holiday resort.  Evelyn, becoming disillusioned with marriage, is looking for something to fill her days.  Philip, meanwhile, is imagining the day Hitler strolls down the promenade.  Into these lives appears a disruptive element: Otto Gottlieb, a ‘degenerate’ German-Jewish painter, and resident of the internment camp. 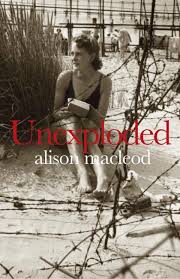 Reading Unexploded I felt reminded of Graham Greene, in particular The End of the Affair, another novel about passions explored against the backdrop of war, but the literary heart that throbs behind Macleod’s novel is Virginia Woolf (who briefly appears here).  Evoking such literary giants automatically brings comparisons – and Macleod is no Woolf (but then, who is?) – but Macleod doesn’t evoke Woolf simply as homage, she has Woolf’s death play a part in the decision Evelyn makes.  Such decisions reveal Macleod as a considered, intuitive novelist.  Such decisions allow her characters to breathe on the page: they are given reality by their reactions to such events, rather than being pieces moved about on a chessboard by an authoritative voice.

I mention this as sometimes Macleod’s novel slips into authorial voiceover in its early parts – she has information she needs the reader to know (“They moved into Number 7 on the 1st of May 1928 and shocked her mother by dispensing with a live-in maid.”)  Such authorial description provides knowledge of the characters personality to the reader, but it has been told to us, rather than revealed through the actions of the characters.  As with the appearance of Woolf – which first appears to be a pleasure Macleod has allowed herself, until it is revealed to have purpose – show Macleod to be a finer novelist than these few, early flaws might suggest.

There are other flaws too – I found many of the early chapters with Philip, the son, went nowhere and provided little insight into the life of a child living in war-time Britain (but even these early chapters coalesce into something altogether more startling, and provide the nail-biting finale).  Evelyn’s access to Otto, after being resolutely denied by her husband, comes too quickly and without latter challenge that it stretches credibility.  Also, Otto’s later, and secret, residency on her street enhances that feeling of incredibility, as this was a time in which people were keeping such close eye on one another.

However, despite these flaws (which do not in any way derail the novel, or ones enjoyment of it), Unexploded is a novel of quiet, restrained beauty, of lives threatening to explode.  She has bought to life Brighton in 1940 with crystal clarity – you can see it, smell it, feel the threat of danger in the air.  The whole novel feels impeccably researched, and yet never once feels that Macleod is wearing her learning visibly – this simply is the world, alive before our eyes.  The lives of the Beaumont family remain engaging and, through to the cinematically intense finale, never steps into melodrama.   Unexploded is a very fine novel, deserving of wide readership.

There is always the danger that its subject matter might appear a little too obvious to see it shortlisted – there really are too many novels that show British romantic life during the Second World War to count – but Macleod’s considered prose deserves rewarding.
Posted by Ben Dutton at 13:39