Colum McCann had slowly been accruing critical respect when his 2009 novel, Let The Great World Spin, seemed to push him into the stratosphere.  It was one of those novels that had literary lovers alight with passion, and it won him the National Book Award and the 2011 International IMPAC Dublin Literary Award.  Needless to say, expectation for his next novel, TransAtlantic, was high. 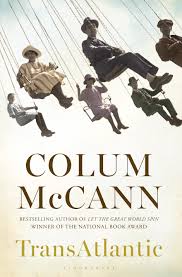 TransAtlantic tells a sequence of interconnected stories that traverse one hundred and sixty odd years and two continents.  It imagines a number of real lives – Alcock and Brown, the first men to fly the Atlantic; Frederick Douglass, the slave who fought for freedom for all slaves; Senator George Mitchell who helped draft the Good Friday peace accords for Northern Ireland – and a number of fictional lives whose stories intersect with historical moments, creating a patchwork effect, revealing the connections that can be made across continents, and through time.

McCann’s prose is startling in its clarity.  He can create whole worlds with a few, precise sentences.  The opening section, detailing Alcock and Brown’s flight, is a master class in precision storytelling, sweeping the reader along, into the skies above the Atlantic with those pioneers, feeling with them every shudder of the plane, every minor piece of damage that could spell disaster.  It is such a bravura piece of writing that everything that comes after it feels a little less impressive (it isn’t, it just feels that it is at times in comparison).

Moving into his recreation of 1840s Ireland, and the seemingly improbable visit by Frederick Douglass (it actually happened), McCann manages to bring alive yet another true life person (prior to Alcock and Brown in this novel, McCann had done so with Philippe Petit in Let The Great World Spin).  McCann clearly knows his history, but his learning doesn’t overwhelm the page.  It simply feels as if we’re walking 1840s Irish streets.

We then meet Senator George Mitchell (who graciously allowed McCann to use his life for this novel), in 1998 as the Good Friday peace accords are being signed. This section feels as real and true has all that has come before it, and brings to life wonderfully the private life of a man whose life has been lived in public.  Time and again this proves to be McCann’s greatest skill – for all these people McCann has written about in TransAtlantic have been public figures, men who desired not the attention but felt the calling to do what they did, and yet whose private lives McCann is able to intuit, sense out, and dramatize so effectively on the page.

What brings these disparate storylines together is the generations of the Ehrlich family, whose stories interconnect with these historical moments in different ways.  These connections shrink an otherwise massive world (in the way that Alcock and Brown’s historic flight shrunk the world) and show that we are more connected than we might believe we are, and that the simplest of decisions can reverberate around the world and through time.

TransAtlantic is a very fine novel from a truly great writer.

I think so.  It certainly deserves to be.
Posted by Ben Dutton at 14:56