A Tale for the Time Being by Ruth Ozeki


Anybody who has read Ruth Ozeki’s third novel, A Tale for the Time Being, would not say that it is a simple novel.  It has two strands – the diary of a Japanese schoolgirl called Nao, written just before the tsunami and earthquake that left thousands dead, and the life of the reader who discovers Nao’s diary, named Ruth, and based on Ozeki, in the Canadian wilderness.  There are various subplots – the letters of a Japanese kamikaze pilot, the life of a one hundred plus Zen nun, and missing animals, Japanese crows, and some stolen underwear.  And yet, at its heart, Ruth Ozeki’s novel is a simple novel.  It is, at its heart, a novel about a schoolgirl trying to find her place in the world, and a novelist trying to find the end to a story. 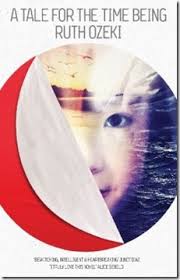 The principal strand – Nao’s diary – is a well-written evocation of a Japanese schoolgirl’s interior life.  Nao uses slang, emoticons, and switches with ease between English and Japanese, and who feels entirely adrift back in Japan after her formative years spent in America.  Sometimes Nao’s narration does tug on the heart-strings, and sometimes I feel Ozeki is deliberately dialling the emotion up to 11, but for the most part this is an entirely successful and moving account.  The secondary strand, that of the life of Ruth and her husband Oliver, is used for dual purposes: to allow Ozeki to elucidate on matters Nao’s narration cannot make entirely clear (for she is unaware of them) and to echo many of the novel’s deeper themes.  Her relationship with Nao’s words causes occasional friction with her husband, and provides a necessary counterbalance and gulp of fresh air for the reader from Nao’s narration, though even Ruth’s storyline is not avert to exaggerated emotions to tug at the reader’s heartstrings (a missing cat strand is particularly manipulative, emotionally speaking).

A Tale for the Time Being is long listed for the Man Booker Prize 2013.  As it is such a complex and loaded novel, and one whose secrets might require a second reading to fully appreciate, it is quite possible that it will be shortlisted too.  Ozeki’s decision to engage with such weighty and profound themes – and I have barely touched upon them, and not even mentioned others (there are strands here about the reader/writer relationship, upon the power of fiction, Schrödinger's cat and the lifecycle of barnacles) – make it a novel worth reading twice.

A Tale for the Time Being is not always successful however – its blend of Zen Buddhism and quantum mechanics, the 9/11 bombings and kamikaze pilots, and peculiars of Japanese culture, requires 163 footnotes and appendices to fully explain Ozeki’s novel.  But when she focuses on Nao’s life, and her fraught relationship with her suicidal father, or on Nao’s bullying at school, her prose truly comes to life and is thoroughly engaging.  For long stretches Ozeki’s novel is very good indeed.  I also suspect that you need to be a Zen Buddhist priest (as Ozeki is) to fully appreciate everything that is on display here.

Quite possibly.  There is much to admire here, and Ozeki’s ambition surely needs some kind of recognition.  It might, however, be a little too quirky to gain that coveted shortlist place.
Posted by Ben Dutton at 16:35

Labels: A Tale for the Time Being, Man Booker Prize 2013, Ruth Ozeki