The Goldfinch by Donna Tartt - a Review


Donna Tartt announced herself brightly in the literary firmament with her debut novel, The Secret History, in 1992.  That novel bought oodles of critical acclaim and enormous pressure for her to produce a follow-up.  What followed seemed a Salinger-like silence, until, finally, a decade later, she produced The Little Friend.  That novel again bought much critical acclaim to her door, and unfortunately for her fans, another decade plus silence, eleven years this time.  The Goldfinch, the novel born from that silence, was published in 2013, and rather unsurprisingly now, to more rapturous critical acclaim.  When the critics of the future come back to look at late 20th century, early 21st century fiction, it is certain Tartt’s name will figure highly in their estimation. 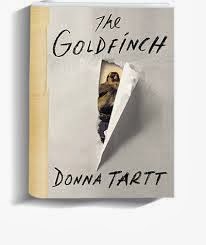 Tartt’s fiction has always been concerned with young people coming of age, of their exploration of sexuality and identity, from the six students in The Secret History, to Harriet in the The Little Friend.  The protagonist here, Theo Decker, is cut of similar cloth.  The novel opens with a bang, metaphorical and physical – Theo loses his mother in a terrorist action committed in an art gallery.  Waking in the rubble in the aftermath, a dying man seems to exhort him to rescue a small painting by the Dutch artist, Carel Fabritius (The Goldfinch of the title), and gives him a ring.   These actions send Theo on a quest, an action he is willing to undertake because, before the explosion, he had seen a red-haired girl, Pippa, with the old man, and wanted to meet her.  This quest brings him into rich Manhattan society, friendship with an elderly furniture restorer, Hobie, before seeing him whisked away by his absent father to Las Vegas where he befriends a Russian émigré and school boy, Boris.  As his life begins to spiral out of control – drink, drugs, art fraud – he retains hold of the one permanent thing in his life – the Fabritius painting stolen on the night of the bombing and his love for the little red-haired girl he hopes one day might love him back.

It becomes obvious, in hindsight, that Theo Decker’s life became frozen in the glare of the bomb blast.  Though he ages – the novel covers at least a decade – he seems to lose nothing of the child-like possessiveness that governed him as a child.  He cannot let go.  He will not relinquish the painting, though he knows the authorities are looking for it.  He will not let another into his heart until Pippa loves him (with the exception of Boris, who steals a place in his heart, and proves again how strong Tartt is on platonic relationships between same-sex couples).  He will not give up his criminal actions until he feels he has repaid the massive debt he owes Hobie for his protection, education and friendship.  And, ultimately, he will not give up his grief, and refuses to dream of his mother until, finally, he has let go of all those other things, whilst in Amsterdam (seen as the novel opens) as he tells us in the opening line, “While I was still in Amsterdam, I dreamed about my mother for the first time in years.”

This telling of the reader of the novels solution at its opening is not new to Tartt.  She did the same thing in The Secret History, leading to one critic labelling that novel “a murder mystery in reverse.”  It is only through reading of the novel that the reader understands why these events have occurred.  It was true of the murder committed by the six friends in The Secret History, and it is true of Theo Decker dreaming of his mother here.

As I read The Goldfinch a number of points of comparison came to mind.  The most frequent mental image that chimed was that of Great Expectations.  Here is Theo, taken from his family like Pip in that novel, and granted a somewhat mysterious benefactor.  There is a girl – Pippa here, Estella there – with whom the narrator is captivated but who remains cold towards him.  It is testament to Tartt’s skill as a novelist that these mental echoes at no point destabilise her narrative.

And what skill!  She proves equally skilled at providing lessons on how to spot fake antiques (without slipping into authorial teacher mode), and at detailing the friendships between men, as she is in showing what it is like to be off your head on prescription medication.  Alongside musings on Russian masters of art, there are thriller elements that would not be out of place in the latest commercial action film.  Then there is the core of the novel, the friendship between Theo and Boris, a comic double act that might surely take its place in the pantheon of the great literary double acts, Vladimir and Estragon or Mason and Dixon, crossed with a touch of Laurel and Hardy.  Their interactions are always the highlight of the novel.  In lesser hands these tonal shifts – comic to thriller, romantic to nightmarish - might have created an off-kilter narrative, but Tartt retains great control of her material, and even at its weakest moments, The Goldfinch sings beautifully.  We just have to hope we readers don’t have to wait until 2025 for her next novel!
Posted by Ben Dutton at 12:55