In the third of my reviews of the Man Booker Prize long listed novels in 2012, I turn now to: 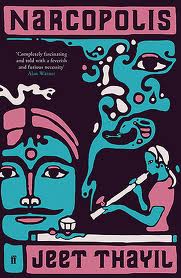 Jeet Thayil’s debut novel, Narcopolis, tells the story of an opium den in Bombay in the 1970s.  Shuklaji Street is where the no-hopers, the prostitutes and eunuchs, the dealers and the users hang out, and Rashid’s opium den is the most famous.  Later in its life, film stars will come there, directors will look to it for inspiration, and the dispossessed will find solace in its walls.

Thayil’s prose is liquid gold.  He has perfect control, and his novel drifts between scenes as if riding the opium high.  That he has received critical acclaim as a poet comes as no surprise – there is poetry in these words.  His central characters – Rashid, Dimple, the eunuch, and Mr Lee, the Chinese worker who has fled his homeland (narrated through an exciting aside that takes us into Mao’s China) – are all equally well drawn.  There is a subplot about a murderer – Pathar Maar – that adds nothing to the novels, and whose excision wouldn’t affect a thing.

The world of these opium dens falls apart when heroin arrives.  What has been a dream-like India becomes a nightmare India.  Race riots, religious riots, death all around this once great city.  Showing this transition from one drug to another, and its effect on a country, is cleverly rendered, though it does give the impression that Thayil is becoming nostalgic for a lost age.  It is worth noting that Thayil has admitted he lost twenty years of his life to addiction, so to read this novel as a nostalgic impression of a lost era might be to misread it.

Novels about drugs and drug addiction are notoriously difficult to pull off.  For every Junky, there are two or three bad literary trips.  Thayil’s novel – but for a few minor missteps (the killer subplot, Dimple’s transition from illiterate to opining on Baudelaire and Cocteau) this is a novel of some considerable power.  That it is has been long listed for the Man Booker Prize 2012 is unsurprising.

Will it win the prize?

In 2008 Aravind Adiga won for The White Tiger, so we know Man Booker judges are not averse to granting the prize to novels about modern life in the Indian subcontinent.  The most similar novel to have previously made the long list is Trainspotting – and that failed to make the short list as, apparently, it “offend[ed] the sensibilities of two judges.”  Such unenlightened attitudes would hopefully not cloud an audience in 2012, but it cannot be ruled out.  It is one of those novels whose longevity is deserved, but will it be recognised?  I’d like to see it short listed, and I suspect it might be.
Posted by Ben Dutton at 13:03