In the latest of my reviews of long-listed novels for the Man Booker Prize 2012, I turn to: 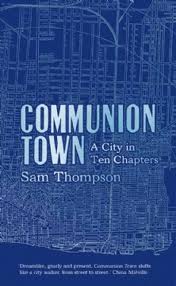 Communion Town, by debut novelist Sam Thompson, is one of the more surprising entries in the 2012 Man Booker Prize long-list.  Though the cover blurb does not advertise it as such – though it hints at it – this is a collection of ten short stories set in around the same fictional city.  This, as a description, however, suggests continuity, and this is the last thing on Thompson’s mind.  Much like Italo Calvino’s Invisible Cities, the one city seen in this work changes dependent upon who is telling the story.  Some of the stories are pastiche – of Sherlock Holmes, of American pulp detective fiction – some stray into science fiction, some into horror, others into thriller and romance.  The novel (if we can call it that) is then a blend, a phantasmagorical journey into the night of a city where anything is possible and indeed will happen.

Being a collection of ten short pieces, there is a distinct shift in quality between the pieces.  The gumshoe story – Gallathea – I found a wonderful pastiche for a few pages before quickly descending into boredom (with the styling, not the story).  The Sherlock Holmes pastiche was very clever – The Significant City of Lazarus Glass (great title incidentally, with a great villain and a great ending), but because it was Thompson pretending to be Conan-Doyle pretending to be Holmes, I felt at a distance from the emotional fulcrum of the piece.  This is a common problem for me with science-fiction and fantasy stories, however – that the author must exert so much effort in creating, building and sustaining his world, the emotional lives of its inhabitants comes as a secondary effort and is, as a consequence, less than engaging.  Nevertheless, by the end of this work, it was this pastiche that remained the most vivid – and I dearly hope Thompson expands upon Lazarus Glass and this version of Communion Town.

Communion Town itself is a wonderful creation.  By removing us from actuality, Thompson is able to play tricks on the reader a real-world setting would not allow – the laws of physics can break, monsters can be real – and I suspect it is a setting to which Thompson will return.  Why waste all that effort creating the place, only to let it rot?  (I mentioned the Lazarus Glass story, but I also want to know more about the first, the eponymous story, as it had me biting my nails with tension).

Thompson’s work, then, enthralled me and annoyed me equally – sometimes between stories, sometimes even in the same story – but this is not a major criticism.  It is actually a good thing – for what it reveals is in Thompson we have a writer very much in control of his work, very much able to write brilliantly, and from whom we can expect exciting new works.

Will Communion Town make the short-list for the Man Booker Prize 2012?

The quality of Thompson’s prose is strong, and is ideas are very good – so from a literary perspective he has the goods – but I suspect the lack of cohesion between the individual pieces (making it a collection of short stories, not a novel) will see it dropped from the short-list.  Which would be a shame, as writing as versatile and interesting as this should be celebrated and more widely read.  Though I suspect his later novels will see him ignored by the Man Booker Prize, I think he might go on to win some sci-fi awards.
Posted by Ben Dutton at 13:25