The Yips by Nicola Barker: A Review


In my reviews of novels long-listed for the Man Booker Prize 2012, I now turn to: 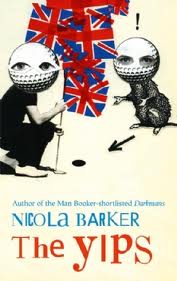 Nicola Barker is no stranger to the Man Booker lists – she was shortlisted for Darkmans and longlisted for Clear – and yet she is one of those novelists that I’ve never gotten around to reading.  I should have come to her sooner, for on the basis of The Yips, she is bloody brilliant.

It seems, to me, that Barker’s fiction is all about the characters – the plot is almost incidental – and in The Yips the cast of characters is broad and all well drawn.  There’s Shelia, a vicar, who is married to Gene, who works three jobs and has survived cancer seven times.  He works with Jen, who is a barmaid with a PhD in bullshit.  Together they meet Stuart Ransom, a golfing legend whose life is in freefall.  Then there’s a tattooist who specialises in genital tattooing, and a free-thinking Muslim sex therapist.  Their lives collide, again and again, quite often in comic fashion.  There is a plot behind all this manic energy, but it’s best not to summarise it, but to ride it, like a wave.  It is the sheer momentum, the fizzle-crack of Barker’s dialogue, and the often hilarious asides that carry you through the 550 page doorstop of book.  It really doesn’t feel that long.

Barker’s novel is certainly outside the realist tradition favoured by most novelists working in English today (myself included), and is closer to a ribald sex comedy of the Elizabethan age.  There are secret identities, lost children, trickster figures, a punch-up on a giant chess-board.   It has a manic, almost magical, energy.  The formatting of her pages is odd as well, deliberately so – reading it I found I couldn’t quite recall how a page was supposed to look, that this was odd, but that it was also distinctly pleasing.  It made the familiar strange again.

In this kind of novel it is easy to develop a favourite character as well, and for me it was a toss-up between Ransom and Jen – is Jen a genius or just a clever flirt?  Is Ransom actually so full of bullshit or is there a real man hiding inside?  Nicola Barker would never deign to give you answers, but she’ll thoroughly entertain you as you try and work it out.

The Yips has been longlisted for the Man Booker Prize 2012.

I have read, a while ago, that it is one of the favourites to take the prize this year.  Having not read her other novels, I can’t say if this is her best, but it is certainly very good, very fresh, and very funny.  The Booker has, in previous years, been given some criticism for not awarding to comic novels (until Howard Jacobson), and it’s sheer manic energy might see it booted off the longlist, but I doubt it.  I’m almost certain it will be shortlisted.  Will it win though?  It might.  I’ll hold off judgement until I’ve read the rest of the longlist.
Posted by Ben Dutton at 14:03