In my reviews of Man Booker Prize long listed novels, I now turn to: 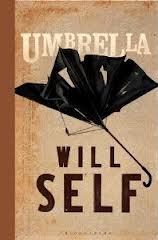 Will Self has always been one of those writers whose work I hear about.  His novels all sound tricksy, clever and comic – three qualities I adore in fiction, and yet, somehow, I’ve managed to avoid reading his fiction all these years.  This is not to say I’ve not read his other work – his occasional pieces in British newspapers have been interesting, insightful, if occasionally sending his readers to their dictionaries.  This later quality is often seen as a negative to the Self-bashers – why does he see fit to exclude the majority of his readers by using words not in common usage?  It’s a crap question, and only an idiot would ask it.  That said, he is not going to win many over with his new novel, Umbrella, which will not only have them rooting out their dictionaries, but also their medical encyclopaedias.   This, as I see it, is a good thing.

Self has been very open about Umbrella.  He wanted to write a modernist novel for the twenty-first century, to prove that the modernist tradition wasn’t moribund and could still prove insightful.  He has succeeded totally in his intended aims.  Umbrella is a literary tour-de-force, undoubtedly Self’s best novel (I can make that claim without having read the others, because the sheer depth and range of this novel is vast) and is utterly brilliant.

It is an apparently difficult novel in construction.  It is stream-of-consciousness told without chapter breaks, almost no paragraph breaks, no speech marks and run-on sentence; it has scenes that switch characters, time and location, sometimes within a paragraph and over 400 pages of it.  You hear this, you think it will be tough to read.  It really isn’t.  I found Umbrella flew past, that I followed its shifts with relative ease, and that it all built to such a wonderful conclusion.

The story concerns Audrey Death, whose Encephalitis lethargica forms the spine of the novel.  We see her life in World War 1, and we see her Doctor, in the 1970s, attempting to wake her with experimental treatment.  We also see this doctor, Busner, in 2010, returning to the hospital where Audrey once lived and he once worked.  Along the way we meet Audrey’s brother, Albert, who has an eidetic memory and who has turned his back on his sister.  The novel unravels these various histories – personal and case – and builds a commentary upon memory, life, health and friendship.

At first I thought it surprising that Self had a novel on the Man Booker Prize long list in 2012.  After reading Umbrella, I think he might just win it.

I think it might.  It has the scope that Booker judges love. It has a story that engages intellectually and emotionally, and is absolutely superb.  Where it might fail is that its construction is deliberately complex, and this might put people off.  If it wins, I suspect it will become one of those winners that people talk about but rarely read (or at least finish).  It’s not populist, but it should be rewarded.  British fiction can be quite tame – it is good to see some experimentation is left in the old beast.
Posted by Ben Dutton at 14:44