The Lighthouse: A Review

In the next of my posts about Man Booker Prize long-listed novels in 2012, I turn now to: 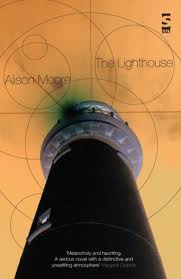 Alison Moore is a debut novelist, whose first novel, The Lighthouse, has been receiving rave reviews – and a lot of press attention for its small publisher, Salt – following its long-listing in the 2012 Man Booker Prize.  The book, winningly presented, comes adorned with praise from the likes of Margaret Drabble and Jenn Ashworth.  It is, then, difficult to come to this work without expecting rather a lot of it.

A middle-aged man, recently separated, has come to Germany to walk part of the Rhine.  Futh’s life has not gone well – he has little to show for it, and he rarely makes an impression.  As he sets out on his walking holiday he begins to reminisce on the things that have gone wrong.  In a parallel storyline, hotelier Ester is becoming increasingly restless in her marriage to Bernard, a violent man who is drifting apart from his wife, and so Ester takes to sleeping with willing guests.  The two storylines co-exist, and slide inexorably towards collision.

Drabble, in her cover quote, calls The Lighthouse “melancholy and haunting” and both are apt descriptions.  Futh is haunted by past mistakes, indecisions and loss.  His walking holiday does not bring solace or understanding – in the way it does with Harold Fry, in Rachel Joyce’s long-listed novel this year, which also has a long walk at its heart – and seems even to drift him further away from who and what he is.  Certain keys scenes and phrases are repeated in the novel, they become a refrain that hollows out the characters, and are replayed with slight variations in perspective, altering our understanding of them.  As this short novel progresses, it becomes increasingly unsettling, and by the final sequence set in the Hellhaus hotel, it is nail-biting.

The name of the hotel is fascinating.  Hell, in German, means light (or bright) – so this hotel is the Light House – but ‘hell’ also has other connotations for the English reader.  There is torment in hell, but there is also light here.  Such contrasts are played out sub-textually, and bring an extra resonance to the novel.

The Lighthouse then is a very resonant, challenging novel.  It is beautifully written by Moore, in sparse but elegant prose.  Every word feels earned and precise and right.  It all builds wonderfully.  It certainly marks Alison Moore out as a novelist to watch.  It must be wonderful for small publisher Salt to have such a prestigious literary prize notice one of their works and reward it (justly), but it also puts much pressure onto Alison Moore – pressure I hope that doesn’t cripple her or force her to be more commercial in her next work.  It is the quiet exactitude of this novel that makes it such a powerful work, and a real surprise.

Will it win the Man Booker Prize?

It is a short novel – not even 200 pages – and its brevity could count against it.  It is a novella, not a novel.  I also suspect – as the judges will – that Alison Moore has bigger, better novels to come.  These factors could easily see it fail to make the short-list.  However, the precision and quality of her prose mark it out as something distinctive and unique, and they could easily take it through to the short-list.  I’d like to think this could win, but I doubt it will.  Though I would be happy to be proven wrong.