The second of my reviews of the Man Booker Prize nominees continues with: 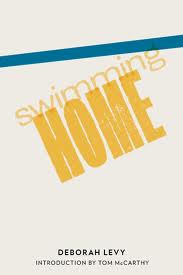 Deborah Levy, whose appearance of the Man Booker Prize long-list, appears as something of a surprise.  Her novel, Swimming Home, appears on the new label And Other Stories, and this is only their third novel.  It is rare for such small presses to gain such national recognition.  I said it appears as something of a surprise – but when you read Levy’s novel, the surprise dissipates.  You realise how quickly how strong a novel this is.  Also, it shouldn’t be a surprise, as Levy has previously published a few novels that gained major literary respect in the 1990s for her novels and for her theatre work.  Nevertheless, it has been a fifteen year gap between her last novel and this.

Swimming Home, like The Unlikely Pilgrimage of Harold Fry (another novel on the Man Booker long-list), is deceptively simple.  It takes two clichés – the British family on a foreign holiday and the stranger interrupting the lives of a family – and turns them on their head.  She finds new and interesting ways to dramatize the Jacobs family and their unwanted, and somewhat unbalanced guest, Kitty Finch.  Much of the drama of Swimming Home comes in attempting to work out why Joe Jacobs’s wife has allowed Kitty to stay when clearly she is opposed to her presence, and in watching the chaos Kitty then brings.

There are a number of standout sequences in this novel – a pony ride that becomes terrifying and loaded with menace.  The haunting refrain of water and all that it prefigures.  The characterisation is spot-on – Kitty Finch is an unalloyed delight, equally terrifying and sexy.  The daughter of the Jacobs family – Nina – discovering womanhood and uncovering the underbelly of French village life – is equally well drawn, and becomes the heart of the novel.

Occasionally the obliqueness of Levy’s prose – written for dramatic effect – undermines some of the solidity of her craft – and where she is reaching for profundity.  Mercifully these moments are short-lived, and the story gallops past them.  Also, a few of the secondary characters – notably the two friends who come with the Jacobs on this holiday – are distinctly underdrawn, and their excision from the text would not see it inhibited in any way.  It is also a very short novel, just shy of 160 pages, and is best read in one sitting.

Swimming Home, then, is a novel that will clearly reward a repeat reading.  Despite its brevity, it packs quite the emotional punch, and sees Levy writing at the top of her game.

Chances of winning the prize?

I would so like to see this novel make the short-list, possibly more for the clout it will give small press And Other Stories.  It certainly deserves to make the short-list, though I have my suspicions that it will be cut.  But then the Booker has in recent years done very little to expectation, so a surprise short-listing might well happen yet.