So I missed a day.  It wasn’t my intention, but again being called in early to work, and then meeting friends for a few drinks after finishing at 10pm meant that I failed in my intention to blog every day for 30 days.  So, because this is my blog, and my project, I will modify my original intent to state that I will blog Monday to Friday and then only if I get the chance on the weekend.  The weekend I work crazy hours.  I can easily do 30 hours in those two days. 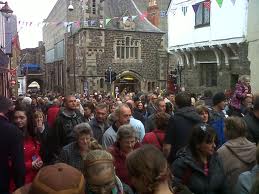 As it’s been a steaming hot weekend, with thousands of tourists pouring into our ordinarily quiet little town (quiet, that is, apart from summer months and holiday times, and then not really all that quiet at all – we are a World Heritage Site, afterall), I have barely stopped this weekend and so, unless I bore you with stories of abusive customers, drunk customers, drugged-up customers, confused tourists, confused locals then I have little of interest to say.  Certainly nothing of a creative nature to share, other than this:

While I’m rushed off my feet, serving this myriad display of human nature, I am observing.  I watch people – writers are good people watchers, generally speaking – and I see those little tics that others might miss.  Watching how a man treats his wife, or a wife her husband, or a father his children, or whatever the combination of people, you gain insight into the human condition that, later, you can use in your writing.

I love going to the pub.  But I don’t love going to the pub to drink (though that is sometimes a major bonus, but only sometimes), but to watch people.  People let their guard down in pubs, they say things that they might not outside.  They're prone to gossip, exaggeration and belittling of others, and that is good fodder for a writer.  I do the same in nightclubs, but in such places you don’t get conversation, you get actions – people act boldly, brightly, they all want to be seen, and such actions, when translated to the page, can make all the difference between your characters being mechanical and actually human.  Knowing to look for that look of pained rejection that they don’t think has been seen, and then interpreting it.  I think such careful observation in a person makes the difference between a good writer and a great writer.  The great writers have all been great and keen watchers.

So next time you’re out there, or rushed off your feet in work, take a moment to watch how people react, and act, and then write it down.  Writing it down, working out how best to show such actions on the page, will transmute your literary creations into something better resembling human flesh.  People watching then, not just a pervy thing to do, but a major process of creative art.
Posted by Ben Dutton at 22:34