I’ve wanted to be a writer for as long as I can recall.  I wrote my first story aged five, about a battle between lions and tigers in the forests of Borneo.  I even drew pictures. 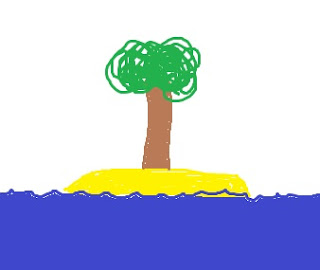 My first proper audience were the kids who came to see the nurse in my boarding school where my worked was pinned to the walls.  I had drawn an epic thirty page ‘graphic novel’ about a man seeking treasure on a desert island whilst being hunted by a stranger.  I was ten.

To the right is how the island looked – and I stretched out a hunt and chase over 30 panels. The viewpoint not once changing.  The nurse told me how often the kids laughed it hurt their sides, following this story.  When I last spoke to a teacher from that school, ten years after I left, those panels were still on the nurse’s wall.  I think I’m probably owned a mass of royalties by now.

The scope I have now as a writer is huge.  I can do literally anything in a script – go anywhere, do anything, tell any kind of story.  But when it comes down to the nuts and bolts of storytelling, you’re there to entertain the audience.  You want to keep it direct, to the point but continually surprising.  The villain in my island story never appeared in the same place twice, but wherever he did appear it was consistent in the confines of ‘the world’ for him to be there.

I’m working on a script at the moment, and at present it has a long pursuit through a city by foot and car and ending in a shootout outside a warehouse.  It was great fun to write but it doesn’t need to be there.  It’s adding nothing to the script.  The script should be as pared down as possible.  Any scene, action or dialogue not advancing the story needs to be thrown out.

I remember once I scrumpled up a new panel of my ‘graphic novel’ in which the hero talked to a passing fish – I threw it out because it did nothing to advance the story.  The nurse asked me why I was throwing it away.  I told her it served no purpose.  “But you spent all that time drawing it and writing it,” she said.  It’s never easy cutting your work, and sometimes lines that make you laugh, or sequences that cause the heart to race, they’re actually slowing your work down.

I lost a good line from a script today.  But I’ll remember it, and it may appear in something else one day.  It may not.   You have to be fight with yourself sometimes to make the script as good as it can be.   You have to think of the audience.  I could see that scrumpled up panel of my story and know it would bore those kids looking at it, so I cut it.  Just as I cut that line because I could see the audience getting bored watching the set-up to the punch-line.  Too much else was going on, and we needed to get there.

So today’s advice: fight yourself, be brutal, and cut cut cut.  Find the heart of your piece and show that to the world.  They audience will love you for it.  And more often than not, simple is better.  The island needed to be that small, because it heightened the drama.  It got me to the heart of the drama.  So RIP you lovely line, but you’re better off dead.
Posted by Ben Dutton at 20:20