In Praise of: Braquo 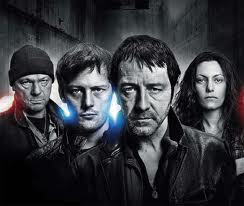 Last night I finished watching the first season of the French crime drama Braquo.  Here in the UK the series aired on the FX Network, and they are currently airing the second season.    The series, for those who do not know it, tells the story of Eddy Caplan and his team, seasoned officers who are not afraid of bending the law, or even breaking it, if it serves their purpose.   As they fight to clear the name of a colleague who has killed himself following a brutal beating of a suspect, the net around Caplan and his team closes, and the stakes get higher.  The eight episode first season proved a master class in suspense.  Just when you think a plan is coming together, it goes wrong.  Just when you think they’re home and dry, there is a twist. 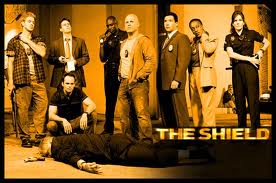 The easiest, and most made comparison, for this show has been the US cop drama from a few years ago, The Shield, starring Michael Chiklis as Vic Mackey.  That show remains to this day a favourite of mine; as it clearly was for Olivier Marchal and his fellow writers.   That shows DNA is sown throughout The Shield.  But like the best imitators, Braquo rises above its origins to become something compelling in its own right.

Eddy Caplan, as played by Jean-Hugues Anglade (best remembered as the male lead in Betty Blue), is a loveable anti-hero.  He, and his team, work despite their moral compass being adrift because they are kinder than the criminals they are trying to catch.  They care for their families in a way the criminals do not.  They are just the right side of being bad.  And Anglade’s rugged, world-wearied expression is perfect for this.  He is certainly well cast.

Braquo’s appearance on UK screens is part of recent surge of interest in European crime drama, exemplified by the success of Steig Larrson’s Millennium trilogy, and The Killing, the acclaimed Danish TV series that made knitwear cool again.  I’ve yet to catch up with either of those projects – though I did see a recent film adaptation of Jo Nesbo’s Headhunters that I thought thrilling if a little bit hollow.  It does seem, however, that based on recent evidence, that European crime fiction is a thriving business. 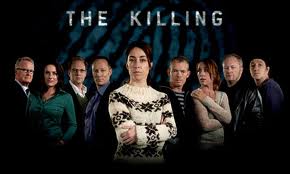 How this will translate to British TV makers has yet to be seen.  I hope we see a resurgence of complex crime drama in this country – we used to do it very well.  ITV’s Cracker remains one of the most compelling crime drama’s ever made.  Now we’ve finally escaped the shadow of Se7en – so many shows owed so much to that film, Messiah, Wire in the Blood etc – and we’re all basking in the glow of complex shows like Braquo and The Killing, perhaps new talent and new ways of telling such stories will bloom here.  We can but hope.
Posted by Ben Dutton at 18:58