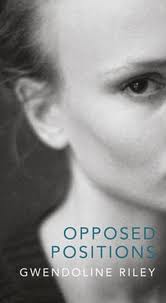 Gwendoline Riley has been working steadily for a decade now.  Her first novel, Cold Water, set the tone for the work to come: young woman, adrift in their lives, stumbling between one romantic fling to another, drinking too much, and generally failing in life.  Aislinn Kelly, like Carmel McKisco before, treads a similar path, but is more successful.  She has published three novels – not too much acclaim or success it seems (unlike Riley, who has won the Betty Trask Award, a Somerset Maugham Award and been shortlisted for the John Llewellyn Rhys Prize) and is about to decamp to America, where she hopes to feel free once more.  America featured prominently in Riley’s last novel, Joshua Spassky, but here it seems nothing more than a country of false promises.  Aislinn Kelly’s life is failing, and so are her dreams.


Opposed Positions is a real maturation of Riley’s talents.  Though a slight novel (it is 230 pages with wide margins) it packs quite the emotional punch.  The relationships at the heart of the novel – between Aislinn and her mother and her manipulative father, and between Aislinn and the men in her life – thrum with subtext and devastate emotionally.  The whole work is considered, and really should elevate Riley into the big leagues of British letters – but I feel that its sheer intimacy, its desire to cling to the humdrum in her characters’ lives might see her side-lined in a way a novel about the rich might not.  This is a very British novel, and a very northern one too, and such qualities make it distinctive, like words coming from a different planet.

Riley’s prose often sings, and there are moments of sheer dazzling brilliance here: the memories of a Morrissey concert that seem to be at once profound and yet not, the exchange of emails from her father that had me biting my fingers in tension.   Opposed Positions comes highly recommended.  It deserves to make her more than £5k.

But it on Amazon UK now.