The Garden of Evening Mists: A Review


In the penultimate of my reviews of novels longlisted for the Man Booker Prize 2012, I now turn to: 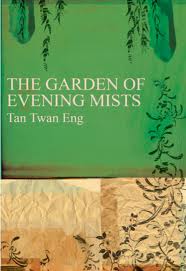 Tan Twan Eng came to prominence with his 2007 debut novel, The Gift of Rain.  That novel received a large amount of critical praise and saw him longlisted for the Man Booker Prize (won eventually by Anne Enright’s The Gathering).  His latest novel, The Garden of Evening Mists, has seen him again longlisted for the Prize (alongside fellow contender in 2007, Nicola Barker).  That his two novels have both been longlisted for Britain’s most prestigious literary prize speaks volumes about his talents.

From the opening line - “On a mountain above the clouds once lived a man who had been the gardener of the Emperor of Japan.” – Twan Eng’s novel announces its author’s control of image, scene and story.  Supreme Court judge Teoh Yun Ling has retired from her post in Kuala Lumpur for reasons unknown (to the reader and to the other characters), but it soon becomes clear she is suffering from a neurological condition that will see her lose all ability to remember a thing.  So she returns to the gardens high in the Cameron Highlands where once she met the “gardener of the Emperor of Japan”, Nakamura Aritomo.  Aritomo, his relationship with the young judge Teoh Yun Ling, and the upheavals of Malaysia after the Second World War form the spine of the novel, as the judge seeks to craft a memorial garden to her sister who died in a Japanese internment camp.

As the brief synopsis above makes clear, Twan Eng’s novel is a deep novel, about history, memory, art, the relationship with nature and geography.  British imperial rule is discussed, there are connections with South Africa and Japan; in a country suffering major trauma, we see the first seeds of globalisation.  All of this together sometimes overwhelms the novel – it is almost like there is too much being packed in.  Massacres in villages pass by like images from another war and seem to have no impact upon the leads, but they are happening on their doorstep.  All of this, as well, suggests a fast-paced novel – something like Maugham may have written, and is indeed invoked in the novel – but Twan Eng is more interested in the poetry of a scene, the precise wording to evoke supposed depth.  Sometimes this works, sometimes it drags the novel to glacial speed.

That said, The Garden of Evening Mists is not a poor novel.  It is a very good one, and Tan Twan Eng remains a stylist of the highest order.  I simply think that in this novel he has over-extended himself.  I think a novel with a closer gaze – on the relationship between the judge and the gardener, between nature, memory and respect – would have deepened what is already there in his novel, sometimes struggling to break free of the shackles of over-plotting.

The quality of Twan Eng’s prose certainly deserves to be recognised.  It strikes me – as it does with fellow long-list entrant and second novelist, Ned Beauman – that there are greater novels ahead.  Both their first novels saw them writing the thing they had always wanted to, their second novels have seen them over-extending themselves for portentousness, and their third should see them finding a deeper focus.  That The Garden of Evening Mists is not an entirely successful venture will, I think, see it remain as a longlisted novel – but I suspect he will appear again in later years, and is certainly a novelist I could see winning the big prize in a few novels time.
Posted by Ben Dutton at 12:26