The Apartment: A Review 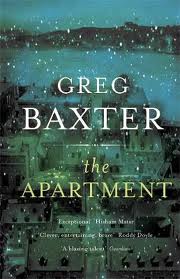 So I was wandering the aisles of my local bookstore the other day.  I wasn’t particularly looking to buy anything, but killing time while it rained outside, and with nothing else to do.  It was one of those days.  You know the type.  That was when I picked Greg Baxter’s novel off the shelf, where it was sandwiched in between two other novels.  One of the rules is never judge a book by its cover – but I did just that.  Penguin have designed a lovely cover for The Apartment.  With cover quotes from Hisham Matar and Roddy Doyle (two very different writers, tonally, causing yet further intrigue).  The first few lines of the blurb on the back have sold me, and a reading of the opening page is enough to seal the deal.

The Apartment, then, is that kind of novel.  One to discover surreptitiously, to come to with little preconception.  Its power lies in its simplicity – that is, a simplicity that carries such overpowering depths.  I will tell you little of the plot but to say that it concerns a man who walks around an unnamed European capital city looking for an apartment.  With him is a female friend, Saskia, and as the first seeds of romance are sown, life in this unknown city is about to become more fulfilled than the narrator has any hope – or desire - for.  All he wants to walk the city, read his novels, and watch the world go by.  The world is doing everything it can to keep him engaged with it.  We can never truly excise ourselves – interaction with others will always bring connection, and connections sometimes blossom into friendship.

Greg Baxter has previously published one work – A Preparation for Death – of which I am oblivious.  I will be tracking it down now.  An internet search shortly after finishing The Apartment threw up a few interviews with Baxter (The Apartment provides almost no biographical detail about its author) and reveal him to be a man interested in quality literature, in the responsibility of the novel to excavate the depths of human experience.  Certainly The Apartment is unafraid of facing up to the darkness.  Its narrator has done some bad things, and they involve Iraq (but they are not what you think), and he meets other people whose engagement with the world is not always stable.  There is a trip to some ruins outside the city with another ex-veteran that hints at great darkness in the soul, churning away.

The quality of Baxter’s prose is always strong.  At times it becomes hyper-real (lengthy descriptions of very ordinary moments) and I know in some quarters this novel has come under attack for these moments; I feel, however, that they are entirely within character.  This man is clearly suffering some form of PTSD – he has sold the objects of his former life, negated his previous experience into oblivion, and wants nothing more than to be a ghost, drifting in a cold, dark place.  He would, at times, become calm, focussed on the insignificant, to quell the rising storm.  What Baxter has done is create a very human character on the page, flawed and damaged, whose problems are never explained but are to be intuited – which is how life is, when you think about it.

The Apartment, then, is a very strong debut novel.  Precise, controlled, and with a humbling beauty to its prose.  Greg Baxter is a name to watch, and The Apartment is a novel to read, perhaps more than once (for the first time in a while with a new novel, I wanted to read it again the moment I finished it).  I read it in one sitting, a gulp of fresh, winter air.  This is perhaps the best way to experience it.  Highly recommended.
Posted by Ben Dutton at 14:42