In my reviews of novels longlisted for the Man Booker Prize 2012, I now turn to: 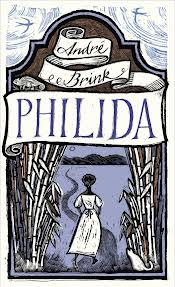 André Brink’s latest novel, Philida, seems very personal.  It tells the story of a slave woman, Philida, in the years and months before the emancipation of the slaves hits South Africa, in 1834.  She is indentured to the Brink family, and she has been in a sexual relationship with the son, François, and has four children by him.  Philida has gone to the magistrate to make a complaint against François: he promised her freedom and is now reneging on the deal.  But the Brink family are on the verge of bankruptcy, and nobody is buying slaves, and they are working less efficiently now they know that freedom is coming.  The lives of everybody involved in this story are about to change – the whole world is about to change.

The opening of Brink’s novel marks Philida out as a unique and forthright young woman.  It takes courage to speak to a magistrate about promises broken, especially when you are a slave and the person you are speaking out against is your master and his family.  Brink presents Phlida through a first person narration that is chock-full of lyrical language, spoken in local patois at times, and further presents a woman who, given the chance, could become somebody powerful.  It is not just Philida’s side of the story we hear, however.  Brink gives voice to the slave masters.  This is where I think the true power of Brink’s novel lies: it is easy to make us feel sympathy for a woman like Philida, and to endear her to us,  but to make men who believe in slavery, and think nothing of beating their charges, sympathetic to the reader is a real challenge – and Brink pulls it off.  You might not like François Brink and his actions, but you can understand them and him.

In a lengthy acknowledgement at the end of the book, André Brink confirms what we have suspected: that this story is the true story of his ancestors, albeit fictionalised from the point where documentary evidence ceases.  Given that it is his forefathers story, one might be given to thinking that Brink has coloured his tale positively, but it is important to note he does not shy away from the true horror of slavery.  We hear of brutal sexual assaults, mothers that kill their children to save them the fate of slavery, of beatings and cruelty, but this is not a harsh novel.  It is a story beautifully told, one full of resilience and courage amongst the brutality, in voice that is powerful and clear.  Brink conjures up South Africa in the 1830s with distinct clarity.  It is a haunting novel fully deserving of the praise levelled upon it.  It is no surprise it has been long-listed for the Man Booker Prize 2012.

The subject matter is right up Booker’s street.  It is well-written, emotional, engaging and true.  It is a novel that can be read a number of times, there are such depths to it.  I think it would be a surprise if it fell from the short-list, and I think it could be one of the big contenders to win the top-spot.  I was thoroughly won over by Brink’s novel.
Posted by Ben Dutton at 13:15