In another of the reviews of novels longlisted for the Man Booker Prize 2012, I now turn to: 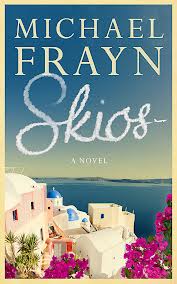 Michael Frayn has nothing left to prove.  Already an award-winning playwright and novelist, he won over the critics many years ago.  He is well known for his farces – the play Noises Off, his 1999 novel Headlong, for instance – and Skios doesn’t do anything to change this reputation.  This is a farce of basest kind, and all the better for it.

The plot of Skios is tough to summarise: let’s just say that two men arrive on the Greek island of Skios, one for a date, the other to give a talk, and through a simple act of misrepresentation by one, they end up switching lives.  I believe Frayn has gone on record as saying he wanted to see if a theatrical farce could work on the page, as a novel – and this is the best description of how Skios works.  It is a theatrical farce that would work really well with actors to bring it all to life.  In fact, as I read, I kept picturing the stage (and the screen, as this could work very well as a film).  That is not to say that it reads like a film treatment, which some novels these days certainly do, but that certain trappings that you would accept on stage don’t work as well on the page.

All of the above sounds like major criticism of the novel.  It is, but this is not to say that for the majority of its length, Skios is actually very funny.  It’s base – there are national stereotypes, it is crude, and it becomes overly complicated in the final act – but Michael Frayn does pull off (just about) the crude theatrical farce as novel.  It does, however, fall apart in the final few chapters.  It has the problem that all farces have – how to resolve all the problems created in a satisfying manner.  Frayn brings all the storylines towards collision, and then suggests what is going to happen and then has something else happen entirely.  Events that have had no real meaning in the novel take on significance and it becomes distinctly unsatisfying.  To me it was a real misfire of an ending that undid a lot of the good work that had come before it.

Skios is not a novel you are ever going to read more than once: it is all surface sheen and no true depth, and it is best read in one sitting (I gulped it down in three hours), but for entertainment it is a good laugh, if overly slight.

Its appearance on the Man Booker longlist does seem more like a gratuity to Frayn: he’s not yet won the Booker, and he probably should have done so for Headlong (where he had the misfortune to come up against JM Coetzee firing on all cylinders with Disgrace), and it has been ten years since his last novel.  Seniority in his field could see him put through to the shortlist, but Skios is not his best novel, not by a longshot, and so this might see him getting culled.
Posted by Ben Dutton at 13:39