J.M. Coetzee won the Nobel Prize for Literature in 2003.  I know this as a fact as every work published by him after this date is plastered with this fact.  Two things are wrong with this statement: 1) you don’t win a Nobel Prize, you are awarded one, and 2) having a Nobel Prize conferred on you doesn’t automatically make all of your work wondrous.

I have always admired Coetzee – and admired is so the right word.  You don’t love Coetzee, in fact sometimes he repels you; sometimes he spits in your face and expects you to like him for it.  His prose is deliberately provocative, and it can be notoriously difficult.  I read Disgrace in hardback, in 1999, and about six years later I read Life & Times of Michael K.  Each successive new novel since Disgrace I’ve put on my ‘to read list’ and never gotten around to.  There always seems to be some other author I should buy first, read first, and be angered by first.  Then, the other day browsing a charity shop, I saw a collection of four early Coetzee novels and, on impulse, bought the lot.  You don’t see any Coetzee’s, other than Disgrace, in charity shops very often.  So last night, looking at these four Coetzee novels, I told myself I better start reading them, before they slip into my books cupboard along with all those other unread novels that gather there, waiting for me to read them. 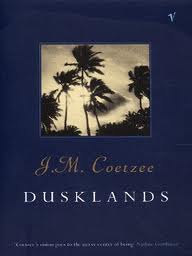 I started with Dusklands.  It seemed appropriate, being his first novel.  I thought it might be interesting to see what protean Coetzeean elements were imbued in this novel.   Quite a few, as it happens.

Dusklands is essentially two short stories.  The Vintage edition I read clocked in at a meagre 125 pages.  The first tells the story of Eugene Dawn, a man hired by Coetzee to write a report into the Vietnam War and who is edging into madness.  The second tells of a different Coetzee, who is tasked with exploring South Africa in the 18th century, and who becomes embroiled in conflict with the indigenous peoples.  Though they are separate stories, there are overlaps between the two in terms of theme and these thematic elements reverberate throughout the novel, building up depth and power.

Of the two pieces, I found the second more interesting.  Both are very well written – you’d expect nothing less from a Nobel Prize ‘winner’ – but the story of Jacobus Coetzee has more visceral impact, and the historical questions raised seem pertinent even today (which is Coetzee’s point).

Dusklands is not always an easy read, but it is an ultimately rewarding one (even if not all its elements work as well as they should).  I firmly believe that literature should challenge ones preconceived notions, as well as entertain, and Coetzee’s debut novel does both these things.  Of course we know he will go onto to do this sort of thing better, and with more style and power, but for the beginning of a career, Dusklands is pretty heady stuff.
Posted by Ben Dutton at 19:24