The Insufferable Gaucho by Roberto Bolaño - a Review


Roberto Bolaño is a novelist whose work I return to frequently.  He has progenitors in Borges, Kafka etc, but feels distinctly separate from them as to become something unique.  Since his untimely death in 2003, Picador in the UK has slowly been releasing everything Bolaño wrote, it seems.  These releases have not come chronologically in Bolaño’s career, but from scattered times in his life, and there does seem to be something apt about that.  Their latest release is actually the last Bolaño worked on in his life – he was prepping it for publication when he died.  Called The Insufferable Gaucho, it is again translated by Chris Andrews into English (he has done sterling work on Bolaño in the past, and does so again here), and is five short stories and two essays. 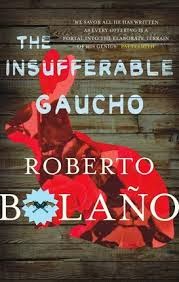 The stories, for the most part, offer something of worth.

Jim, the opening piece, is brief.  Jim is a Vietnam vet now living a poet’s life in Mexico.  The little Bolaño tells us actually speaks volumes about the psychology of Jim, but ultimately the piece feels under-developed, almost like an offcut from The Savage Detectives.  I suppose this criticism is my way of saying, I liked Jim but wanted to know more about him, and that is a testament to Bolaño’s skill as a writer.

The title piece is much longer.  The Insufferable Gaucho is a retired judge, Manuel Pereda, who leaves the financial ruin of Buenos Aires and attempts to reconnect with the land at his ranch in the rural pampas.  Pereda is an interesting character too, another cool portrait drawn by Bolaño.  He is a man attempting to understand a world that changed inexplicably and suddenly around him.  Bolaño’s prose is taut here, and there are some wonderful lines.   “Police work’s about order, he said, while judges defend justice.”  These ideas of order and justice echo throughout The Insufferable Gaucho and the other stories.

Police Rat was the piece I cared least for.  It tells of a rat, Pepe, who is a police officer in the tunnels – man made and rat made – investigating a series of murders of other rats.  Its conceit – the anthropomorphisation of rats – allowed me no point of entry in which to care for Pepe or the problems of the rat world.  Consequently, Police Rat felt quite disposable.  However, something chimes in this story with something Bolaño was doing in his masterwork, 2666.   Police Rat shows a loner attempting to solve a series of murders – and a series of murders haunt the central section of 2666 in ‘The Part About the Crimes’.  I wondered later if Police Rat had been a way for Bolaño to discuss the Ciudad Juárez murders indirectly, metaphorically, or at least with a little distance, for they were clearly something that troubled his subconscious.

Alvaro Rousselot’s Journey, the third story, tells of an Argentinian writer who travels to France to locate a filmmaker who has turned his novels into films without credit.  His journey – as all literary journeys tend to – reveal to Alvaro more about himself than he expected and alter his perspective on the world.  This is a somewhat tired formula, but Bolaño at least finds an interesting avenue into it, and has fun along the way.

Two Catholic Tales, the final story here is, as its title suggests, two stories: The Vocation and Chance.  The presentation of these stories is the most unconventional.  They seem to be one long paragraph, but are separated by numbers.  The contents 1. The Vocation and a young man is considering the priesthood, and as he waits for his calling, discusses films and muses on the martyrdom of St. Vincent and 2. Chance, in which an inmate in a mental hospital remembers his youth and makes an escape into a madder city.  This literary diptych contains more than it initially seems too, and I feel requires a second reading to be properly considered.

Finally, the two essays.  The first, Literature + Illness = Illness, seems to offer its conclusion in its title, and Bolaño goes out his way to prove it, discussing his own illness (he of course knew he was dying), French poetry (particularly Mallarmé’s "Brise Marine" and Baudelaire’s “The Voyage,”), and the responsibility of art.  Its tone is peripatetic, and perhaps not always clear, but there are nuggets of gold here.  If you have read any of Between Parentheses, a previous collection of essays from Bolaño, you know what to expect.

The same is true of the final essay, The Myths of Cthulhu.  This time Bolaño discusses Latin American fiction – Gabriel Garcia Marquez, Octavio Paz, and Mario Vargas Llosa amongst them – and though this essay feels underdeveloped beside Literature + Illness = Illness, it is not wholly without merit, and when Bolaño is firing on all cylinders, and he does a few times here, he is exceptional.

The Insufferable Gaucho is, then, an interesting addition to Bolaño’s collection of works in English.  It is not a starting point for the new reader, but to those already familiar with his body of work.  They are written with his distinctive voice, with his passion and humour.  They are, as all his works are, full of heart, and written in the face of tragedy.  Always worthwhile.
Posted by Ben Dutton at 13:46