The Spinning Heart by Donal Ryan


The Irish economy crashed in 2008.  The Celtic Tiger was slain, and modern, cosmopolitan Ireland was left in ruins.  From the ashes of this once mighty land, from amid the smouldering, empty ghost towns around Dublin, there are whispers of song, of voices trying to be heard, of a people trying to say: we’re still alive in here, we still matter, please don’t forget about us.  Donal Ryan’s debut novel, The Spinning Heart, gives voice to those people. 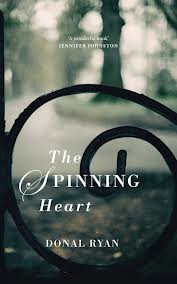 Before being nominated for the Man Booker Prize in 2013, Ryan’s novel had already gathered much critical attention.  As the first novel published by Doubleday Ireland, it seemed chosen to speak or a nation.  Then Waterstones, the UK book chain, selected it as one of their choice books of the year, after it had won the Bord Gáis Energy Book of the Year at the Irish Book Awards.  All of which must have been some major validation for Donal Ryan who admits he had been collecting the rejection slips from publishers for this and the novel he had written first (The Thing About December).  None of this I knew when I picked up The Spinning Heart a few months ago and read it.

The first point to note is that The Spinning Heart is a polyphonic novel.  Each of its 21 chapters is a monologue from a different character, some of them quite short, and their points of intersection slowly accumulate, creating an impressionistic vision of small town Ireland.  Ryan has admitted in interviews that his is a difficult novel to pitch. Say it’s a novel about recession and watch their eyes glaze over.  So you say it has kidnapping and murder in it, but James Patterson this is not.  So all you can say about it is that it is an ambitious, beguiling novel about people trying to survive when the world is crumbling and tumbling around their eyes.

Sometimes with polyphonic novels, each of the different voices can begin to sound similar, if not the same.  It is a relief to report that Ryan’s voices remain distinct, mostly due to his canny ear for dialect and turns of phrase – be they from Irish builders, a stranded Serbian immigrant, a single mother or a young child – and that his densely-packed sentences allows us to peer into the very souls of his characters.  There is something very special going on here.  Often with a debut novelist, you hear critics harping on about the ‘promise’ of this author – if he’s like this now, imagine how he’ll be in ten years, with experience and skill under his belt.  With Donal Ryan we have something more than that, we have talent fully formed, prose realised with such skill and beauty on the page it is tough to believe this is a debut (which it isn’t, as he had already finished the novel that will now be his second novel… but still, wow.)

The Spinning Heart, then, is a powerful, incendiary novel that displays immense power from its writer.  It is a novel that speaks to a contemporary problem with heart and grace, and though it offers no answers – there might perhaps be none, there certainly isn’t for the characters we meet here – it is a novel that will remain important for highlighting a moment of major international change through the eyes of some of those on the ground, caught up in the spinning heart of the crash.  Donal Ryan is most certainly a writer to watch.

Will it be short-listed?

Almost certainly, I feel.  Not that long ago a debut novelist won the Booker – Aravind Adiga with The White Tiger.  With The Spinning Heart it could happen again.
Posted by Ben Dutton at 14:10