A Memory of a Place

An interesting post on Jason Arnopp’s blog today – read it first, then read my response.

I love stories like these. I’ve not been to a Cypriot bar like the one he describes, but I could smell its drink-stained walls, hear the familiar hubbub of patrons, and see my way into his dingy, unsafe but much loved flat. I read a story like that, and I have a whole world bubble up in my mind. I see a short story, a setting, there is so much potential. It makes me think, I would have loved an experience like that – and I think that because it takes distance to realise how much those days truly mean.

Living in rural Wales my whole life, there have always been a few pubs I can go in where everybody knows my name, the drink I have, and what I do. The town where I currently live there are three pubs where this is the case. I can go in them just once a month and they remember. I know all the regulars and can have the same drunken conversations again and again. This is why my story differs to Jason’s: he speaks of Sam’s Taverna with affection because it is a place where he felt safe, where the maddening constraints of the real world could not knock him down (or at least so easily). For me, my equivalent(s) of Sam’s Taverna – though they are good places – are constraining because they are safe. I am unchallenged in them, same as Jason was, but the outside world is unchallenging too. I work part-part time in a supermarket while I write and try and sell my work – a novel, a screenplay – and though the writing is tough, it is fun, the supermarket job is just dull. The familiar routine of that job and these pubs where everybody knows my name and knows what I do, it is cotton-wool, it makes me feel safe, when really, I need to be challenged.

This leads me to suspect that though sometimes we all need that place we feel safe, we’re better off striving out into the unknown, challenging ourselves, trying to become better than we are.

On his blog Jason asks his readers to talk about their Sam’s Taverns: this is mine:


My Sam’s Taverna? The place that comes closest was a pub called the Cwmanne Tavern. Unlike Sam’s, my tavern is still there, in mid-Wales, on a country road between Lampeter and Cwmann. It changed hands three times while I was a student in Lampeter, but with each new landlord it remained my pub. Lampeter, if you’ve never heard of it (and few have) is a town with a population of less than 2,000 people, 20 miles from the next nearest town, a bus service that stopped after 6pm, and when I was there a place where there was no TV signal. You had to make your own fun. It also has one of the smallest universities in Europe (before it merged), with a live-on-campus population of less than 800. Really, you had to make your own fun. It’s no wonder for a town of just 2000 people, it has 9 drinking establishments! It used to have 11… 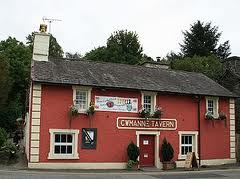 During the first landlord’s tenure (2000-2003) we were often in there until dawn, singing songs while he played the guitar. We had a pretty strong pub quiz team then – me the only student, the rest the local farmers – and we drank far too much beer. Walking the half mile, bleary eyed through the breaking dawn, empty fields either side of me, and no traffic on the roads: it could almost have been the beginning of a zombie apocalypse, or be the greatest day to come.

The second landlord (2003-2006) changed many things – for the better. He was a Dutch man and he bought in bottled beer from all over Europe with names I could never say. He filled the jukebox with Johnny Cash and Nina Simone and Dire Straits – and he put me in charge of the pub quiz nights. We’d quiz, then play pool until 3am, and every Tuesday night sing along to Nina Simone’s Sinnerman – all 9 minutes of it – and then drink some more. I picked the best quizzers in that pub and we ended up battling the Eggheads on BBC2 one Bank Holiday in 2006 – we lost, but it’s those kind of things that make the memory of a place great.

There were bad days too: I fell out with that second landlord over the pub quiz I hosted. His wife shouted at me when I asked a literary question – “nobody likes literature,” she said, “nobody reads books any more.” This in a student pub. Because they didn’t pay me to host the quiz, and this being not the first argument about having questions about literature in the quiz, I stormed out. I kicked the door on the way out. My bootprint in the shattered wood on the doorframe is still there today. I over-reacted, and was rather drunk, but she was the one out of order. People might not read as widely as they once did, but everybody knows who wrote Frankenstein, right?

I’d written a novel about a girl who was a regular in that pub – and here’s proof you can know a place intimately and yet not know it inhabitants – I saw her there all the time but barely spoke to her. I was desperately in love with her and so could never speak to her. We both circled around in that pub, never really knowing one another. I told her, one drunken night, I had written this novel in which she featured. She demanded to read it, and so I had to let her. She admitted afterward she wanted to read it so she could laugh at me: instead she found herself moved. “It’s not me in these pages,” she said, “But I’m honoured if that’s what you see in me.” The novel was published as a print-on-demand novel a few years later, and though I’m not sure she ever read it, she, that novel, and my memories of my university days are all intangibly embroidered into memories of that pub. It was a great pub.

The final landlord changed very little, and I still loved it, but I had finished my PhD, and it was time to finally leave (2008). I’ve not been back since, but I visit every now and again in memory. I suspect I will write about it one day. I suspect it is still as great as my memory makes it out to be.