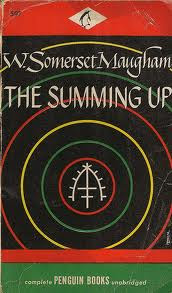 W. Somerset Maugham wrote ‘The Summing Up’ in 1938. He was sixty-four years old, and his greatest literary achievements – ‘Of Human Bondage’, ‘Cakes and Ales’, ‘The Moon and the Sixpence’ amongst others – were all behind him. The world in which he lived was about to enter into a bloody war, and society as he understood it as a younger man had changed irrevocably. At was at this crossroads in his own life and the life of the world that he felt the need to sum up all that he knew.

‘The Summing Up’ is a blend of material: it is autobiography, writer’s guide, and philosophical treatise. Late on in the book he writes, “The best homage we can pay to the great figures of the past… is to treat them not with reverence, but with the familiarity we should exercise if they were our contemporaries.” Somerset Maugham has become one of the great figures of our literary past, but when one reads his books his world retains familiarity, though the days he describes have long passed. I could hear his voice as I read his words. He could almost be a contemporary.

This is not a book for all. As autobiography it is distinctly lacking: one will learn little of the details of the man’s life, though one would gain a slim understanding of his philosophical leanings. As a writer’s guide, it is also distinctly lacking: his advice seems not to extend much beyond read, and read widely. He contends that the majority of people have not the skill, nor the inclination to be great writers, that they fear the graft required of Lady Muse. And as a philosophical treatise, it is distinctly lacking: We are given a whistle-stop tour through Spinoza, Kant and Nietzsche and Somerset Maugham’s explores elements of their teaching but provides little else. And yet, the sincerity of his writing provides the work with gravitas. It reveals a man facing up to mortality and to the end of a career. It has that tang of bittersweet fulfilment with life. He admits he will write more, but the house is already built. Life is coming, as it must, to an end.