Today has been a productive day – and it’s still not even five pm. I’ve pretty much finished drafting the pilot of my science-fiction children’s show that is heading to the BBC Writer’s Room at the end of the week. It’s sharp, bright, funny, dangerous and sometimes a little bit mad. The dialogue zings along, and the twists and turns of its narrative will enthral kids and make their parents a little nostalgic. It’s the pilot: and I have the first season mapped out. If the BBC pass I might just turn it into a kids book. But I’d rather the BBC didn’t pass, and it opens the doors I hope it does. I hope it even makes it to series, and is shown later next year as it is set in 2012! More on this series, though, I cannot give right now.

I’ve also been typing up the new 1,000 odd words I wrote by hand for my literary novel. Writing by hand? What is this, the 1800s? Well, it’s the way I like to write my fiction, long hand, in ring bound books. That’s my first draft. As I type it up, I redraft it. Then I print it all out, redraft it again, and then, hopefully, have a finished novel. But there might just be another redraft first. I tend to work on the novel in the evening, when I have peace and quiet. I try and do 2,000 or more words every day, but if you read last night’s post, you’ll know I was rather engrossed in the new Patrick Rothfuss. Haven’t finished it yet, because I had to finish Dickens’s Hard Times first. And even without the Dickens, I doubt I’d have finished it: The Wise Man’s Fear is over 1,000 pages long! 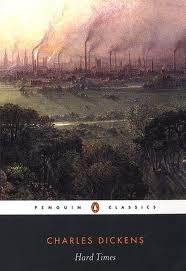 Mini-review of Hard Times: I liked it. It struck me that Dickens had one novel in mind at the opening, but quickly changed his mind for a better story – and a chance to attack the Utilitarian movement. The conflict between Bounderby, Gradgrind and the fortunes (or lack thereof) of Coketown highlighted a number of problems facing Britain’s poor in the nineteenth century. The final mine rescue and the attempt to flee Britain by the bank robber dramatically enhanced what is essentially a minor novel in Dickens oeuvre that he wrote to help sell copies of the magazine Household Works. Over the last year and a half I’ve been reading the complete works of Dickens, and thoroughly enjoying a novelist I’d previously found – can I really say this? – dull. He’s not dull. He might just be the greatest novelist of all time. I simply did not get him for the longest time. Thankfully I now do.

Well, must return to the typing up of last night’s work, then a little supper, and then lights dimmed, feet up, read some more, then write some more, then bed. And repeat tomorrow. The recipe for a perfect day.