1970s American cinema was at a crossroads.  The musical-western-Technicolor extravaganzas that had dominated the 1950s and 1960s, and once so-wowed cinema audiences, were drawing less crowds.  They were stale in a contemporary world that had suffered the assassination of a president and the Vietnam War.  America had lost its innocence, and had gained a youth questioning how it had all come to this.  The ‘Young Beards’ took over from the late 1960s (Lucas, Spielberg, Coppola), and they made some loud, brash pictures.  But there was a second thread to 1970s cinema, not interested in chasing the youth money, as many of the pictures now were, but instead choosing to try and answer some of the questions of its demographic:  Why?  How?  What is the point?  Some mature, interesting pictures came out of that period: Five Easy Pieces, One Flew Over the Cuckoo’s Nest, Two-Lane Blacktop.  What these pictures shared was a gaze not ordinarily seen in American cinema, at least not for a long time: the lives of the poor, the disenfranchised, the workers.  Many of the films that came out of that time are cornerstones of American film studies today.  Not all of them made an impact, though. 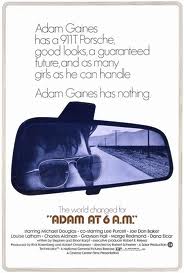 In 1970, a yet to be famous actor by the name of Michael Douglas was trying to make his name in his father’s industry.  He’d already done one film that reflected the youth dissatisfaction with contemporary American politics, in Hail Hero! (1969). For his second film, a journeyman TV director by the name of Robert Scheerer signed him up to play the titular Adam, in the film Adam at Six A.M..   Written by Elinor and Stephen Karpf, Adam Gaines is a lecturer in semantics at a Californian university.  At the start of the summer break, a relative dies and he travels back to the Missouri town where she lived, and dissatisfied with his Californian life, enlists as a labourer cutting down trees and falls for a local girl. 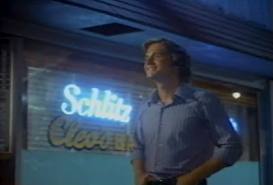 It is an entirely unconvincing film that everybody involved in seems to think is high art.  There is an intellectual debt to European cinema – Blow-Up is mentioned, particularly to draw a contrast between the ‘yokels’ who think the film a waste of time, and Douglas’s Gaines who tells them how wrong they are.  His position as a lecturer in semantics leads to an explanation of what that subject is, given to the same ignorant ‘yokels’ – and here is the big difference between European cinema and a film that wants to be considered in the same breath: a European film would not have semantics explained in dull exposition. In fact, such a film would never have explained the subject, but rather allowed us to see how the film plays out a semantic argument.  In this film, what people think they want is not what they want – and director Scheerer plays out the semantic arguments in obvious visual and textual ways, allowing no nuance or subtlety to develop in his picture.

That said there are some things of note here.  Occasionally – and it really is only once or twice – Scheerer’s direction takes on a greater visual quality that previously shown (there is a well shot, lit, and directed sequence of a character alone in the dark, with only the light of the phone-booth to keep him company, as he drifts further away from people he thought friends and a woman he doesn’t know but wants to).  The cast really go for it as well – Michael Douglas, looking as young as a student rather than a lecturer, commits himself admirably – star wattage is in evidence, even here.  Lee Purcell as the girl, Jerri Jo Hopper, is given a rather thankless duty as a girl who just wants marriage and a home of her own, but manages to do something with it.  She is a girl you’d want to marry, until you know she wants to marry and have the same life her folks had too: that is, she’s a girl who’d go to those musical-western-Technicolor extravaganzas and be happy – and aren’t we past that now?  Joe Don Baker manages to do something as well with another underwritten part, of the labourer best friend who wants to go into TV repair but can’t ever get the money because he’s spending it on booze and gambling. 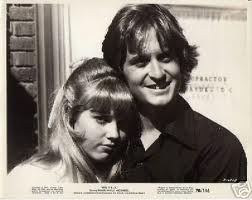 The end of the film has many of the characters riding off into the sunset, and Adam Gaines settling down to be with the woman he loves. But it’s not the end of the story – and here is where the fact that Gaines is a lecturer in semantics becomes important plot-wise, and so unsubtly done – for as he walks around a home filled with memorabilia for his forthcoming wedding, he reads the signs and in them sees his future.  One visual clue would have been enough in a European film, but in Scheerer’s the whole house is filled with them, it is a grotesque realisation of the nightmare that awaits Gaines if he stays in Missouri, if he stays with Jerry-Jo.  For after all, for these young men of America, isn’t the future in tackling injustice and asking questions, not settling for what your parents had and being happy?  As the ice-cream melts on the two-lane blacktop, the total rejection of past attitudes is forged, and Gaines is off to an uncertain future.

Adam at Six A.M. was never a hit in its own day.  It is too unsubtle to ever be a hit, and too weakly directed.  Its script is laboured, a bloated exaggeration of European art-house movies of the day.  It has some lovely scenery – the film was shot in the backwaters of Missouri – and Michael Douglas would go onto bigger, better things: as producer he would unleash some of those aforementioned great pictures into the world.  But this, it’s a relic of another age now, full of rusted ideas.  It could have been great, it just wasn’t.
Posted by Ben Dutton at 14:44