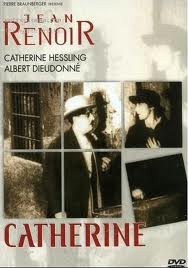 Une Vie Sans Joie (1924) aka Backbiters, and sometimes called Catherine, is the first film on which Jean Renoir – that giant of French cinema – received a directing credit.   He shared directing duties with Albert Dieudonné, an actor and writer as well as director, who had some major roles in the silent era (including in this) before retiring from cinema with the onset of sound (though he would be recalled from retirement in mid 1930s and early 1940s for a couple of roles).  Despite the co-direction credit, Une Vie Sans Joie is stamped with certain Renoir preoccupations and imagery that his hand is easy to detect – some sequences are so painterly in their use of light, that one might even detect the hand of Pierre-Auguste in certain scenes.

Looking back on this film, almost ninety years later, is really looking into history: the scenes of provincial life display rustic charm and ingrained poverty – at times it could be a Zola novel bought to life, but this was the reality of French rural life in the 1920s (though it could easily be rural life of the 1880s).  The Zola connection is not made lightly – Renoir would, two films on from this, film a version of Zola’s seminal classic Nana.  Cinematically this is also ancient – the acting, from Catherine Hessling as the lead to Maud Richard as Madame Mallet is over-emphasised in that silent movie way, almost as if they didn’t believe the camera could pick up the nuance of the face.  Catherine Hessling is given free-reign, mostly I suspect, because she was Renoir’s wife.

The story is also ancient: the maid to the Mallet family upsets the Madame and so is forced onto the street.  She finds accommodation but cannot pay the rent.  She hears of a job but Madame Mallet controls it.  Monsieur Mallet, who has always taken sympathy on her, hires her has his secretary but Madame Mallet controls her husband too well.  The ending, which should resolve these problems, instead resorts to a runaway tram, and an almost Keystone Kop-esque chase, filmed though in seriousness not jest.  I also suspect there was some disconnect between what Renoir wanted to achieve with this movie, and what Dieudonné desired.  The base comedy – the runaway tram, but also a scene of two men attempting to outdo each other with their ability to put up political posters that ends in slapstick – doesn’t always rest easy against the solemn tone of Catherine’s descent from satisfied life.

As a beginning to a cinematic career, Une Vie Sans Joie displays certain skills.  When Renoir & Dieudonné’s camera lingers on faces, when it shows us those scenes of provincial life – the crosscutting between a carnival and seduction becoming death – it is a film that reveals talent, but too often it resorts to cheaper tricks, it is occasionally bathetic and most often relies on sentimentality to provoke a reaction.  Later in his career Renoir would show how to create a reaction in an audience without resorting to such base manipulations, but he wasn’t there yet.
Posted by Ben Dutton at 13:23