Day One: The Inheritance of Things Past 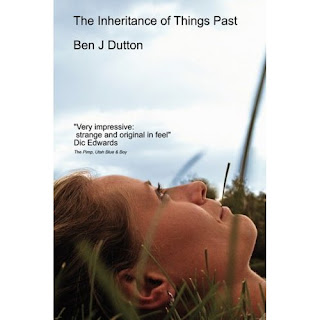 'The Inheritance of Things Past' continues to sell well, especially considering the minimal advertising it has won and the lack of publicity in the British press. To those who have bought it already I thank you, and if you are considering it, then thank you too. For those who have yet to hear of my novel, its summary is something like this:

Will Hargreaves, a successful film producer, learns he has cancer. Fleeing to the wilds of Scotland he remembers the moments that have led him to this: His fiery relationship with a beautiful singer, Sarah Crowe, and the truth and depth of his love for a work colleague, Laura Johnson. Facing up to his past is only the beginning of a journey that will teach Will how to live and how to love...

It has been praised by playwright Dic Edwards as "Very impressive: strange and original in feel." It is available from all good retailers for £6-99.

Sales pitch over. I started 'Inheritance' as a short story for my Creative Writing MA at the University of Wales Lampeter (which has recently changed its name to The University of Wales: Trinity St David's) but once it was complete I saw potential for a larger work there and over the summer of 2005 began to work it out, stuck in a little box room on the third floor of a shared house, with a wide window out over the rooftop to the hills of the small Welsh town where I lived. Apart from the odd belligerent bee that swept into the room, it was quiet, warm and bright and I wrote the novel quickly.

It is strange, now, to look back at that original draft, written in the second person and with its chronology being mixed up in a way I liked but first readers found confusing. When I started work on a PhD for which the completed novel would form the basis I was urged to change it to the first person and did so, reordering the chronology as I went.

By 2007 I had finished these changes and began to approach publishers with the work. It was a disheartening process. I got many rejection letters, some pleasanter than others. I sometimes sent out the second person version too, and had one agent tell me it was the most awkward novel she had ever read. I ditched the second person version then completely. The first person version was accepted by You Write On in 2008 and came out in early 2009 (don't believe Amazon who say 2008, it was definitely 2009).

People ask me what I'm working on now, and as writers we often don't like to talk about it - I heard it once described so: "When you tell someone the plot for your new novel you tell the story so when you sit to write it you've already told it and so you've lost the enthusiasm for it." I think that feels right as an explanation. So I won't tell you what I'm working on, but I will say I've finished the next novel, called at the moment 'Shadow of the Mountain', and it’s seeking representation as we speak. It's a novel about a Pakistani family moving to a small Welsh village in the 1990s, and following an accident in which eight year old Vikram Sindh loses a leg, the village becomes divided and much conflict ensues. Tracing the village through a decade, it, I hope, engages well with issues of race, faith and nationhood and feels very timely to me. I'm half-way through my third novel now, too, called, again tentatively, 'Grass and Ember' and it’s a much bleaker work, but feels so incredibly rich to me that I have come back to it after six months away, during which time I wrote 'Shadow of the Mountain'.

The creative impulse remains large in me, and always will, with too many ideas floating in my head that I know I will never tell all the stories that are there, but while the ocean is fertile, I will write and, who knows, hopefully someone will read and be moved by what I have dragged up.

I'm always interesting in people's thoughts on where and how creative ideas come from, so, if you read this and you are a writer: Where do you think your ideas come from?
Posted by Ben Dutton at 11:01